Prisoners of the Moon: The ‘100% Nazi’ behind the Moon landing

Review: V2 rocket scientist Arthur Rudolph was spirited to the US to work on the space programme 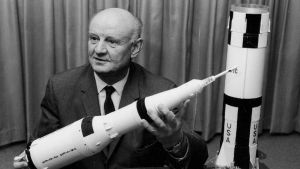 Engineer Arthur Rudolph - a prime force in the development of the V2 rocket for Nazi Germany. Photograph: National Aeronautics and Space Administration

Film Title: Prisoners of the Moon

Johnny Gogan, a dogged Irish film-maker, offers an alternative commemoration of the Moon landing with this odd combination of documentary and historical recreation. Unfortunately, the oil doesn’t quite mix with the water.

The picture examines the still controversial life of Arthur Rudolph. A prime force in the development of the V2 rocket for Nazi Germany, Rudolph was spirited to the US as part of the scheme – codenamed Operation Paperclip – that enabled German scientists to assist with the space programme.

It seems as if (surprise, surprise) the Americans were forgiving in their assessment of what constituted a war crime for these useful physicists. An early report identified Rudolph as “100 per cent Nazi,” but that was hushed up and he was admitted to the project.

Years later, doubts emerged about his responsibility for atrocities at the Mittelbau-Dora concentration camp and he ended up renouncing his US citizenship. The story hit an interesting juncture in 1990 when he was detained trying to re-enter the US from Canada. The subsequent hearing forms the core of Gogan’s film.

The documentary elements are rigorously researched and consistently fascinating. Beginning with a dip into the grim tunnels, familiar from Thomas Pynchon’s Gravity Rainbow, where the V2 was developed, the picture invites US officials, academics and descendents of slave workers to flesh out a complex narrative. We hear how Werner Von Braun, the most famous of the Operation Paperclip scientists, was obsessed with space travel from before the war. Clips of early Fritz Lang science fiction further stress how the notion long predated the Moon landing.

All this is good. Unfortunately, as the film moves onwards, it becomes increasingly taken up with an unconvincing restaging of the immigration hearing. Maybe these scenes would feel a little less jarring to an overseas viewer, but the casting of two very familiar (and very good) Irish actors in key roles – Jim Norton as Rudolph, Cathy Belton as Barbara Kulaszka, his controversial lawyer – proves too hefty a pill to swallow.

One half expects Pauline McLynn to burst in with the Rich Teas and the egg sandwiches. Nobody seems comfortable with the text. Nobody seems very American.

Prisoners of the Moon remains fascinating. With some ruthless recutting, it could be a lot better.