Hozier in Cork: ‘It's good to be home’ the Bray man tells crowd

Review: He was on to a winner from the start, thanks to the guest appearance of the sun 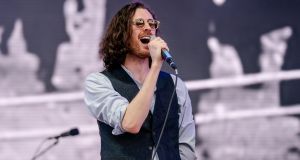 Hozier greeted the Cork crowd with ‘It’s so good to be home’. Photograph: Josh Brasted/WireImage

The summer concerts in Cork’s Irish Independent Park have been subjected to what feels like 40 days of rain, with the perennially anorak-clad Liam Gallagher a natural fit for the almost biblical downpours of last Sunday.

Wicklow native Hozier, who greeted the Tuesday night crowd with “It’s so good to be home,” was on to a winner from the start, thanks to the guest appearance of the sun.

Ahead of the sold-out gig, Hozier told Cork’s Red FM he hadn’t played a concert in Ireland in a long time, and admitted to some pre-gig nerves. It’s “a big old crowd to let down”, he said.

He needn’t have worried. The mainly twentysomething audience – plus a few older heads in among the couples and the gangs of young women – basked in the rare opportunity to be able to have a beer and listen to music in the open air without fear of drowning.

Taking to the stage at 8.45pm, fresh from having played in Athens earlier this week, Hozier said he couldn’t have dreamed of of a “more perfect day and a more perfect place” to perform songs from his debut and sophomore albums. He felt blessed, he said later.

Hozier’s warmth kept the crowd engaged throughout. Asking his support act, Maryland-born Maggie Rogers, to join the stage for the encore, Work Song, was a typically generous move from a man who at the end of the gig thanked sound engineers and lighting in addition to his band.

One of the earlier highlights of his set was From Eden, the second single from his debut studio album, Hozier. Other songs played on the night included Nina Cried Power, Someone New, Nobody, Talk, Always, Movement, Would that I and Dinner and Diatribes.

Hozier made his €1,500 video for Take Me To Church in Cork six years ago, when he was just another young musician struggling for a break. The video, based on the oppression of the LGBT community in Russia, went on to be nominated in that year’s MTV Video Music Awards.

The highlight of the night for the crowd was his rendition of that song, the track that propelled him on to David Letterman, Saturday Night Live and the Grammy stage.

Hozier used the encore to thank the actors from the video, who are part of a sketch comedy group called the Derrynane Robot Club. He also extended his gratitude to video creators Brendan Canty and Conal Thompson.

Before singing Wasteland, Baby! Hozier told the crowd that it was inspired by the Doomsday Clock being stuck at two minutes to midnight. He said that he wanted to write love songs for the impending doom. The song – about the end of humankind and the death of the planet – was nevertheless one of the gentlest moments of the gig.

Bray’s favourite son has has a great year. He avoided the “difficult second album syndrome” with Wasteland Baby! reaching the number one position in the US. After this triumphant return to Leeside, he performs on the Belsonic Stage at Belfast’s Ormeau Park on Thursday 27th, before playing Glastonbury and Lollapalooza in Chicago, and then back to Ireland for Electric Picnic.

‘Ten of the best books set in Ireland’: Does the Guardian get it right?
9

The Streets: None of Us Are Getting Out of This Life Alive review – Unoriginal material
Real news has value SUBSCRIBE