Philip King: On My Culture Radar 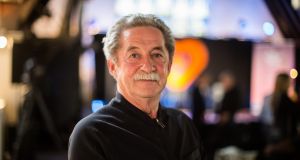 Philip King: ‘We’ve arrived at a place where Irish music is being accepted’

Current favourite book
One is a music book: It Gets Me Home, This Curving Track by Ian Penman, one of the first music writers. The title itself is alluring. It’s a series of short essays on musicians like Donald Fagen of Steely Dan, Charlie Parker and James Brown, and there’s something compelling and insightful about his writing. I’m also reading The Age of Surveillance Capitalism: The Fight for a Human Future at the New Frontier of Power by Shoshana Zuboff. It reads like a thriller but is a non-fiction book, and an important one at that.

Restaurant
Out of the Blue in Dingle does wonderful, freshly caught fish, and has superb views. I never get a chance to eat there while Other Voices is on, but I recommend it to everyone else.

Comedian
It has to be Tommy Tiernan, doesn’t it? When I’m in Dublin, we stay in the same hotel and I bump into him at breakfast. Sometimes we have a chat, and sometimes we don’t. I have enormous admiration for him. His ability to seek out the heart of a matter with respect and tenderness is part of his unerring skill. And in this world that we live in today, the explosion of laughter he brings is much needed.

Play/musical
The work of Teac Damsa’s artistic director is Michael Keegan Dolan is magnificent. He produced Swan Lake/Loch na hEala, which is touring America at the moment. Michael now lives in west Kerry, where I live, and bases his company here. A lot of people come to the west of Ireland to take something from the place, but he’s replenishing it. His new show, which opened the Dublin Theatre Festival, is Mám, and it’s revelatory. It brings together contemporary dancers, trad music with Cormac Begley playing concertina, and an avant-garde music collective from Germany called Stargaze. It’s a collision of the grammar of dance, the grammar of our own tradition and the grammar of European art music. Appropriate for the time we live in, it explores identity, migration and breaking down borders and bringing people together.

Artist
John Gerrard is a Tipperary-born artist who brings technology and other devices into his work. He makes cutting-edge, large-scale productions – there’s one called Western Flag that I love. He came to Dingle a couple of years ago to talk about his process and I was mesmerised by his intellect, skill and ability. Great artists make ideas visible to us, and challenge us to understand where we might be going – we see a hint of something that’s about to reveal itself.

Album
The Livelong Day by Lankum is an important piece of work. The depth of their knowledge and scholarship means they breathe life into their songs, particularly The Wild Rover and Katie Cruel, the old Karen Dalton song. Lankum just played at Other Voices in Cardigan, Wales, and it was the best gig I’ve seen for 25 years. It’s our music. We’ve arrived at a place where Irish music is being accepted, engaged with at a deep level after years of people thinking – if they’re being cruel – “that’s backward” and “that’s a bit Irish”. In general there’s something remarkable happening in music in Ireland right now. One on hand you have Fontaines DC, The Murder Capital and Girl Band and then you have Lankum, Lisa O’Neill and Ye Vagabonds; the genres are different, but there’s an austerity in all of them.

City
At the moment my favourite city is Berlin, especially as I’m reading Learning from the Germans by Susan Neiman, who spends six months of the year in Ireland. With all the talk about the 30th anniversary of the fall of the wall, and Brexit, and building walls and excluding, in Berlin today you hear the music and see the plurality. You’re walking through history whether it’s the second World War, the cold war or where we are now. There’s a tolerance in the city I find engaging, and of course the music is remarkable; Irish musicians have a history of a strong relationship to it.

Podcast
I’ve been listening to The Brexit Club, presented by Ruth Sanderson. As Brexit began to unfold and the complexity of it became mind-numbing, I’d find myself here to get clear thinking around the politics and structures. With Brexit, there’s a lot of obfuscation, there’s probably some fake news, but this podcast is interesting, objective, engaging and clear.

Other Voices returns to Dingle on November 29th to December 1st. othervoices.ie

Have arts and culture been demoted again?