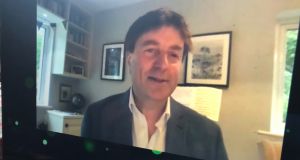 In a normal year next Friday would see the first of more than 80 events – chamber music concerts, quartet masterclasses, artist interviews, instrument-making workshops, talks – in Bantry for the West Cork Chamber Music Festival, bringing 5,000 visitors to town. “But just because fate and the virus cancelled the festival, it did not mean the festival would cancel all music making,” says artistic director Francis Humphrys.

They found ways to bring 40 of the 70 cancelled musicians together in venues all over Europe and US, he says, and found production companies to film and record concerts in Chicago and Cork, Amsterdam, London, Paris, Warsaw, Bremen and Bloomington. The logistics – and costs – sound hair-raising. These dozen or more films will be streamed daily (June 26th-July 5th).

“Despite everything it is still Beethoven Year,” Humphrys says. “So we’ll have a fiery Kreutzer Sonata by two young Dutch players; the great Vadim Gluzman will play the Spring Sonata, and Dudok Quartet will give us the stupendous late quartet that ends with the maddest fugue in western music. Alina Ibragimova and Alasdair Beatson have been filmed playing Mozart, Debussy and Ravel.

“The four quartets – Pacifica, Doric, Signum and Dudok – will, among others, play Haydn, Britten, Shostakovich, Schulhoff, Schubert and Caroline Shaw. The brilliant Ukrainian pianist Anna Fedorova, whose Rachmaninov concerto performances have been viewed millions of times, will join string players led by Mairéad Hickey in the greatest of the Schubert Trios and his evergreen Trout Quintet.”

Also lined up are sparky French wind quintet Ouranos Ensemble, perfoming at the Centre Culturel Irlandais in Paris, and the Dagda Ensemble, led by Caitriona O’Mahony, on the Triskel stage in Cork, telling the story of female composers with flourishing careers in 17th-century Italy and France.

With online versions of this summer’s chamber music and literary festivals, West Cork Music plans Masters of Tradition in Bantry in August, following the roadmap for reopening. westcorkmusic.ie

What’s co-ordinating video-streamed performance like? “Producing an opera is always a juggling act, with many factors at play,” says Irish National Opera artistic director Fergus Sheil, after a few Friday Opera Sessions under his belt and as they’re about to wind up this Friday.

Working on the sessions is “just the same, but of course different. Now I am discussing and explaining the process to singers and pianists, conducting arias in thin air (then editing myself out afterwards), sending videos around, discussing video editing and trying to make sure everything gets done in time. We have a great technical and logistical team and we’re all developing new skills and ideas. We hope to be back making opera in person soon, but we’ve learned one or two new things along the way. The audience response has been really supportive and strong.”

Boyle observes that “singing and performing from home is certainly better than not singing at all, although the process is not as simple as one would think – finding a room with suitable acoustics and lighting, and figuring out camera angles are all par for the course now, while hoping the postman or DHL don’t call halfway through your cadenza! I’m lucky to have relaxed neighbours who enjoy the music they sometimes hear, or at least say they do.”

She’s glad production companies are thinking outside the box, but “when we come out the other side, I will never again take for granted the energy of a captivated audience, the spirit of a pulsating orchestra and the visceral connection with colleagues as you create something profound, through human contact and interaction”. irishnationalopera.ie

Dancer from the Dance: Festival of Irish Choreography

John Scott’s second Dancer from the Dance: Festival of Irish Choreography is this year a five-day (June 29th-July 3rd) digital edition with dance, talks and workshops being livestreamed. It aims to expand the perception of Irishness and includes works from TikTok/Instagram star Morgan Bullock, a young African-American woman from Virginia with a grá for Irish dancing.

As theatre tries to figure out the future, last week Dublin Theatre Festival offered a “message of hope”, with responsibility to be “one of the leaders in rebuilding Irish theatre”. The Abbey – like other theatres – is working out what can be salvaged from Covid-19 destruction, and will soon announce its revised 2020 programme.

In the meantime, Dear Ireland, its rapid-response monologues performed by 50 actors online, continues by inviting its audience to join the national conversation by writing a letter (maximum 400 words). Beginning “Dear Ireland”, write about what we should be discussing – coronavirus, Black Lives Matter, housing or the economy, whatever. Selected letters read from its stage will be streamed online. Deadline June 28th. abbeytheatre.ie

In the actual world, on midsummer’s night, Sunday, artist and writer Sara Baume’s commission from the National Sculpture Factory became a Midsummer Moment for the Cork festival. The neon text artwork installation So Sick and Tired will appear on the building. It’s a fragment (here in bold) from a resonant lockdown text by Baume:

“It is May. The lawn is embarrassingly long. Buttercups tower over the daisies. Their stems crane and curl. The broken thing in the attic is still broken, but seems no more so than a month ago. Mark and I have grown accustomed to its noise. We have finished the bottle of Baileys we were gifted at Christmas but had intended to gift on to somebody else, unopened. We are both suddenly so sick and tired of our parsimonious life. We long for debauchery, but no debauchery presents itself and so we return to the solace of our tedious routines, our habits of penury and preservation.”

National Sculpture Factory director Valerie Byrne is “excited to present a real world, non-virtual, artwork experience for the public after so long – something we have hugely missed”. Catch it in person over the rest of the year. corkmidsummer.com; nationalsculpturefactory.com