The Day After I’m Gone: Terrific debut about family disharmony 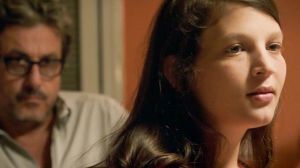 Among the more acclaimed debuts of the 2019 Berlin Film Festival, this excellent Israeli film attacks a serious subject with rigour and ingenuity.

We begin as we don’t mean to continue with Yoram (Menashe Noy), a vet in a safari park near Tel Aviv, doing investigative surgery on a big cat. Analogies present themselves (injured beasts in enclosed territories?), but the real action is taking place in Yoram’s home life. We see him grimly filing a missing-person report on his teenage daughter Roni (Zohar Meidan). Later she returns grumpily without anything like an explanation.

Shortly after this trauma, state officials who have been monitoring social media wake Yoram in the middle of the night to explain they fear Roni is contemplating suicide. Sure enough, the girl has taken a large number of pills and is drifting into a coma. The scene that follows showcases Nimrod Eldar’s directorial gifts. The camera stays static at room’s length from a door frame, behind which panic and despair are warring. It’s telling that this is among the few times in the picture when Yoram shows strong emotion.

Roni is eventually discharged in decent enough shape, and the two visit Yoram’s brother-in-law Arie (Alon Neuman). To this point, Roni has appeared only fleetingly – most often in hurried motion. The first, delayed two-shot of father and daughter has her out of focus. Eldar is telling us that dad, recently widowed, is unable to engage with the young woman’s fractured psyche. She is literally and figuratively outside his frame.

That does begin to change over the coming weekend, but not so much as to risk sentimentality. Roni edges dad into laughing at himself. They find some common purpose among awkward relatives. Shoots of rapprochement break through the hard earth.

Such are the traumas of this region that merely watching a film from Israel feels like a political act. Overseas antennae will perk up when soldiers quiz Yoram as he approaches Arie’s house. It does indeed transpire we’re entering the occupied territories, and the film-makers don’t waste the opportunity to poke the bellicose settler mentality.

Arie uses the wearily familiar language of domination. The Arabs are “animals” who are “jealous” of Israeli society. His bare-knuckle philosophy extends to his niece, whom he describes as “your spoiled one”. He believes she just needs a good talking to. These scenes are politically a little on the nose – playing to the arthouse-movie choir – but the attitudes are common in all families throughout all countries.

The battle to disentangle Roni’s inner tortures brings out the best in some and the worst in others.

More subtle are the shades added by the clever, teasing sound design. There are constant hints of noisy activity just at the limits of perception. That might be a football crowd. This might be a protest. Just as Roni at first barely makes it into the frame, these manifestations of a city in everyday turmoil fail to break the coiled tension between father and daughter. Both are closed in by inhibition.

In one touching moment, presaged by a credit sequence, Yoram hears and sees a fun fair on the horizon: a vision of the harmony still elsewhere for two humans who have not yet reached personal detente.

Available to stream on MUBI from June 18th