7500: Who will succumb to Stockholm Syndrome first? 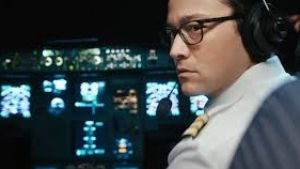 It’s just another night in the cockpit for co-pilot Tobias Ellis (Joseph Gordon-Levitt).

It’s just another night in the cockpit for American co-pilot Tobias Ellis (Joseph Gordon-Levitt). As he prepares to fly to Paris from Berlin, he chats to his flight attendant girlfriend (Ayilin Tezel) about their son and what school he should attend. He exchanges pleasantries and tech specs with the captain (Carlo Kitzlinger). Switches are dutifully flipped and a sandwich is ordered.

Once they are in the air, the cockpit is charged by terrorists wielding shards of glass. Tobias manages to close the door, but not before he is injured and the captain is dead. Thus begins a nervy stand-off as the hijackers threaten passengers and staff while pounding on the cockpit door.

Over the intercom, Tobias begins to talk with a younger, uncertain terrorist named Vedat (Omid Memar). Who will succumb to Stockholm Syndrome first? And can this unlikely connection save the plane and those aboard?

This clever first feature from writer-director Patrick Vollrath, who was nominated for an Academy Award for his 2015 short film, Everything Will Be Okay, is strong on aviation detail. The darkened cockpit setting creates a sense of confinement, even if the film is seldom as convincingly claustrophobic as such one-setting thrillers as Doug Liman’s The Wall (2017) or Rodrigo Cortés’s Buried (2010).

The two-step between Gordon-Levitt and Austrian newcomer Memar as their respective plights shift and evolve is more pleasingly naturalistic than one might expect from the genre that gifted us Non-Stop and Snakes on a Plane.

And most film fans will be pleased to see Gordon-Levitt, a talented actor who has been missing from cinema screens for too long, despite an impressive list of credits that includes The Dark Knight Rises, Mysterious Skin and Lincoln. On Amazon Prime from June 18th