Bob Dylan: where to start in his back catalogue

The album to listen to first, three to check out next and a song of 12 dreamlike verses 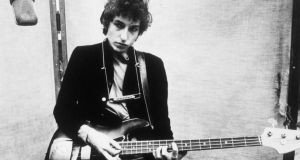 Bob Dylan: from a folk-club act and cult hero into the voice of a generation. Photograph: D.A. Pennebaker, Howard Alk/Eat the Document documentary

The album to start with

The cover told the story. After the portrait of the unformed boy, fresh in from Minnesota, on his self-titled debut album, followed by the young lovers huddling for warmth in a wintry Greenwich Village on Freewheelin’, Barry Feinstein’s grainy and dramatically cropped black and white portrait on the cover of Bob Dylan’s third album projected the image of an altogether more serious and substantial figure, still wearing the clothes he’d borrowed from James Dean but bent on tackling the big issues of the day. The Times They Are A-Changin’ transformed Dylan from a folk-club act and cult hero into the voice of a generation – an epithet he claimed to detest but never quite succeeded in erasing.

As a cultural wave began to break, a 22-year-old was directly confronting mothers, fathers, senators, congressmen, writers and critics with evidence of their failures. And when informed by those mothers and fathers that Dylan “couldn’t sing”, his followers loved him all the more. The image was set, and no matter how many wonderful bands he would go on to recruit – the Hawks, the Rolling Thunder troupe, the Never Ending Tour ensemble – he will live longest and most powerfully in the memory as a lone figure in the spotlight with an acoustic guitar, a harmonica and a defiant nasal drawl scraped clean of all varnish, delivering songs like these. There are bleak tales of injustice visited on the invisible poor (The Ballad of Hollis Brown and North Country Blues), the angry civil-rights broadsides (Only a Pawn in Their Game and The Lonesome Death of Hattie Carroll) and an evisceration of cold war hypocrisy (With God on Their Side), each of them explicit in its accusatory detail and suffused with an empathy and a seemingly world-weary wisdom so striking in one of his age.

But in this first entirely self-composed album there were also songs of self-discovery coming from more oblique angles, like When the Ship Comes In and Restless Farewell, and a moment of luminous tenderness: Boots of Spanish Leather, transformed from the traditional Scarborough Fair into one of the songs with which he gave a generation access to their newest and deepest feelings.

The three to check out next

If the rackety boogie of Subterranean Homesick Blues lit the fuse, this was the explosion. He had found the formula he was looking for: a gnarlier, snarlier version of the British Invasion bands, an endless high-voltage, high-heeled surge of guitars, keyboards and drums, a first-take sound with the big-city blues in its veins and a poet at the controls, singing about tortured thieves and junkyard angels and remaking the Old Testament as a road movie. Like a Rolling Stone, released as a six-minute single, was the harbinger and also a career pinnacle. What did it mean, this howl of triumphant disdain? It seemed to mean whatever you were thinking yourself, making the world feel a bigger place. And, to finish off, Desolation Row, a universe created from scratch in 11 stripped-back minutes of carnival hallucinations.

Any expectation of linear development having been blown apart by the excursions into country and other forms of vernacular music that followed Dylan’s motorbike accident, Blood on the Tracks was received with a sigh of collective gratitude. Souls were soothed by the return to earlier songwriting strategies in the graceful melodies, the finely wrought lyrics and the unadorned arrangements of Simple Twist of Fate, Shelter from the Storm and If You See Her, Say Hello, while Tangled Up in Blue showed him using all his powers to hold a narrative up to the light and examine its many facets. There was the entrancing mystery of Lily, Rosemary and the Jack of Hearts, a tale of violence and lust in the old west, and a lost-love song of kindness, regret and eternal resonance set to a skipping rhythm in You’re Gonna Make Me Lonesome When You Go. The album followed his divorce from Sara Lownds, but its stories were universal: “Life is sad, life is a bust/ All you can do is do what you must/ You do what you must do, and you do it well/ I do it for you, honey baby can’t you tell?”

In 1989 the Canadian producer and guitarist Daniel Lanois took Dylan down to New Orleans to help him refocus his music with the widely praised Oh Mercy. Eight years later the partnership was resumed in Miami. Dylan’s voice was wearier and rougher now, its changed texture emphasised by Lanois’s production techniques. Everything on Time Out of Mind sounded older; it was as if the Muddy Waters band of 1956 had just vacated the studio but left behind their amps and instruments, with which Dylan and Lanois created their spectral webs of sound. The mood was at its most intense in Not Dark Yet, a slow-march meditation on mortality, and the 16-minute Highlands, an ambling 12-bar blues in which Dylan collapsed the space between Robert Burns’ hymn to a lost rural home and an encounter with a waitress in a Boston diner. And, half-buried, there’s Make You Feel My Love, destined to become probably his most covered song since Blowin’ in the Wind.

One for the heads

’Cross the Green Mountain (2003)
Invited to provided a song for the film Gods and Generals, Dylan drew on his study of the American civil war in the New York Public Library to construct an eight-minute ballad imagining the thoughts of a dying Confederate soldier. Lines from Whitman, Yeats, the Books of Revelation and Daniel, and the works of “the poet laureate of the Confederacy” Henry Timrod were sprinkled through 12 dreamlike verses, each given a subtle shift of texture or emphasis. The compositional methodology, using layers of time and memory like painted gauzes on a theatre set, would influence the songs of his late period. – Guardian

If you are reading this on the Irish Times app, you can get the playlist here

The Movie Quiz: Who stirred the late Olivia de Havilland to consult her lawyers?
6

The appeal of Phil Collins? It's his friendly, happy face
10