A dementia-friendly tour at the Chester Beatty uses artefacts as a visual springboard into past events. 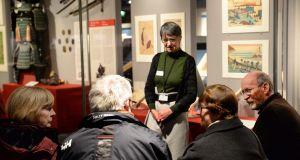 The nuns have the flu, and so won’t be joining the group. There has just been a phone call from the retirement home where they reside in south Dublin to alert the Chester Beatty Library staff who are leading a special tour this morning.

This once-monthly tour is for people who have various forms of dementia or Alzheimer’s. It’s part of the Azure Project, an international initiative within cultural organisations that began at the Museum of Modern Art in New York. The intention is to make galleries and museums more inclusive to a wider community of visitors.

The Azure Project is now running in a number of cultural organisations in Ireland, including the Irish Museum of Modern Art, the West Cork Arts Centre and the National Gallery. It has only been on offer at the Chester Beatty for a few months. The numbers on the tour are capped at 10, which breaks down into five people who are living with dementia with and one companion each. The companion can be a carer, as in the case of the two nuns who are absent due to the onset of flu, or a spouse, partner or friend.

“We never ask who is the person with dementia, and who is the carer,” Heidi Campbell says. Both Campbell and Justyna Chmielewska are employees of the Chester Beatty Library. The other people around the table in the atrium where we are having coffee, are volunteers. Today Noeleen Bryan will be leading the tour, which is themed on fashion. Two other volunteers, Brian O’Neill and Nateghe Moane, are tagging along, as everyone is still learning from each other.

Our experience of being guides is of giving information and talking a lot. But in these tours, you are trying to help start a conversation

Chmielewska did three days training with the Azure network, and then trained the others. “We have six tours and six themes,” she explains. Their six themes are fashion, sacred beings, animals, creativity, symbolism, and the development of a book.

What are the challenges of doing these tours?

“To remain silent and wait for people to process what they are seeing,” O’Neill says.

“Our usual experience of being guides is of giving information and talking a lot,” says Bryan. “But in these tours, you have to pull back. You are trying to help start a conversation.”

Today the nuns are ill and have had to drop out at the last minute, but there are two retired couples who have come along to join us for coffee before the tour starts. Kay and Michael Coll, and Una and Greg Barrett, settle in behind the table and everyone chats for some 20 minutes or so. The idea is that conversations start even before people begin to look at artefacts.

We take the lift upstairs to the first floor. Despite the prior talk with the guides in advance of the visitors arriving, I still have very little idea what this tour will be like. What becomes evident right away is that it doesn’t have the kind of range that museum or gallery tours usually have. This tour is about focusing on only two or three items closely, rather than a sweep of highlights.

“Sit down and make yourselves comfortable,” Bryan says, as she and another guide give everyone folding stools. There won’t be any walking around. This is about sitting in front of the two adjoining exhibits and using them to access memories. We settle in an ad-hoc row in front of a ferocious-looking piece of Japanese coat of armour from the Edo period, made from metal, with tassels of knotted silk.

Bryan asks us all what is the first word that comes to mind as we look at it. The guides on these tours try to first elicit responses from their visitors rather than giving them a lot of information.

“Some sort of body armour.”

This leads to talk about armour, and the time it would take to create this object, and conjecture about how heavy it might be to wear. It turns out that both the Colls and Barretts have spent time in Asia, and this ignites a lively conversation about what they saw there, and they swap stories about walking along the Great Wall of China.

Bryan waits until they’re finished talking. Then she points out the tassels on the armour. “The tassels were to tie things on to, because there were no pockets.”

“The Japanese turned everyday activities into art,” someone says.

There is a helmet that goes with the suit of armour. “Did they go bald wearing helmets?” one man asks, touching the back of his own full head of hair.

The second piece Bryan asks us to look at is in the next case along. We pick up our stools and shuffle down the length of one glass cabinet. This second object is a woodcut print of a Japanese woman, who is wearing a kimono that extends far around her.

“She’s drowning in a sea of fabric.”

“Did those women have black teeth?” is the next comment.

“Hello?” Byran says, laughing and everyone else laughs too, at the randomness of the question.

“Aren’t black teeth a sign of beauty?” says the same person. There follows some chat about whether black or white teeth are meant to be more beautiful.

“The sleeves of kimonos were used as a way of expressing emotion,” Bryan says.

“You could put the sleeve over your face to hide,” she explains. As she says that, one of the group temporarily hides their face in their sleeve.

The conversation turns to the traditional high wooden sandals that some Japanese women wear. Bryan manages to include everyone, and coaxes the quietest member of the group into engaging.

“Do you wear high heels?”

“No! Too uncomfortable,” is the answer. She is wearing runners and sticks out her feet for us all to see.

The conversation is loosely based on the museum objects we are all looking at, but their purpose is really as a kind of visual springboard into past events. Campbell has explained to me earlier that while many people with dementia have short-term memories, their longer-term memories are much stronger, and the guides try to trigger these.

“One of the challenges is whether people will be chatty or not,” Campbell says. This group is definitely chatty. The other visitors to the Chester Beatty Library cast some curious glances our way, and a few pause to listen. They all respect the space around the group, and nobody walks in front of us, or blocks the view of the cabinets we’re looking at. The tours are at noon on a Tuesday: the staff has deliberately chosen what they know is a quiet period of the day and week.

Bryan wraps up at 1pm. Between coffee and the tour, the whole experience is an hour. “But we’ve been told by carers that people carry it away with them, and keep the conversation going afterwards,” Chmielewska says. “Every tour is different, because of the people on it, but that’s what we hope to achieve each time.”