A Fantastic Woman: A funny, wry, inspiring film of its time

Review: It’s the favourite to win best foreign language picture at the 2018 Oscars 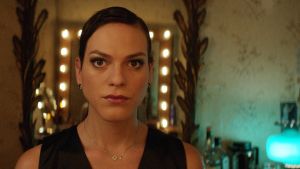 The favourite to win best foreign language picture at this weekend’s Oscars has already earned the right to brandish the dreaded i-word (the one that contains “con” and ends in “ic”). Over the last week, Janelle Monáe has included a tribute to Sebastián Lelio’s Chilean drama in the video for her song Django Jane. The relevant image finds Monáe looking downwards towards a circular mirror that obscures her genitals. The referenced shot in A Fantastic Woman itself offers a nod to a 1981 self-portrait by Armen Susan Ordjanian.

We can make some safe guesses as to Lelio’s intentions here. The proudly titled A Fantastic Woman details the struggles of a trans woman to make a life for herself following bereavement. Catching sight of her face placed between her legs, she is – as the victim of constant mid-level bigotry – surely reminded of how others insist on defining her. It’s a powerful, loaded shot that sits beside endless accompanying glimpses of the protagonist’s reflection. Everywhere she goes she is confronted with one flat version of her identity.

All this makes A Fantastic Woman sound heavier than it actually plays on screen. There are moments of anger and frustration here. The picture works as an extended scream against lazy assumptions and blinkered bigotry. But it is also light, funny, wry and inspiring.

We begin with a striking image of the Iguazau Falls in Argentina, scored to the insidious, persuasive melodies of Matthew Herbert. We then move towards the core story. The focused, charismatic Daniela Vega plays a waitress and aspiring singer named Marina. As we begin, she is enjoying a stable, fulfilling relationship with Orlando (Francisco Reyes), a well-off businessman some three decades her senior. Following Marina’s birthday celebrations, Orlando collapses and is conveyed to hospital. He dies some time later from an aneurism.

The picture highlights the fragility of such (indeed all) relationships. Once Orlando dies, her partial protection from bourgeois norms and legal proprieties falls away. The dead man’s family prove endlessly hostile in large and small fashions. It seems as if she is to be expelled from the apartment she shared with her late partner. Even her dog is taken away. An ex-wife scowls suspiciously. A female detective is hired to discover if Marina was involved in Orlando’s death. Through it all, our heroine retains her quiet dignity.

The English-language title is a little misleading. One could be forgiven for expecting camp extravagance in the style of early Pedro Almodóvar. There are certainly hints of that film-maker here, but, as he demonstrated in his excellent Gloria, Lelio sticks a little closer to the tenets of realism. Benjamín Echazarreta’s cinematography favours the more subdued end of the palette. Marina is certainly not “fantastic” in the word’s original, literal sense (she exists, after all). She ultimately earns the most colloquial version of the adjective: brave, fun, crazy, awesome.

There is a taste of the great Hollywood “women’s picture” about A Fantastic Woman. Like Mildred Pierce or Stella Dallas, Marina is required to carve out life in a world hostile to (and, in this case, unconvinced by) her gender. Vega coasts through the role with a relaxed assurance that never strays into brashness or showboating. Imminently the first transgendered person ever to present at the Oscars, Vega allows a vulnerability to peak through the carapace of confidence. She is in virtually every scene. She owns every one of them.

Arriving in an era where increased recognition of trans rights has been accompanied by a petty, obsessive, conspiracy-driven backlash on social media, A Fantastic Woman feels very much a film of its time. Were we able, we’d include an extra star for its rediscovery of a song by, of all people, The Alan Parsons Project. No, really. Hang on for it during the final credits.