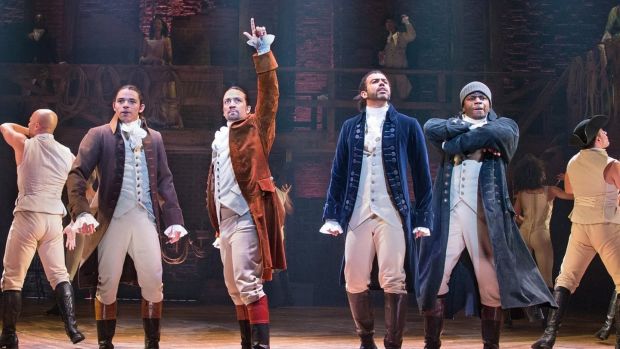 It’s impossible to recreate the electricity of a live performance but with a musical as beloved as Hamilton, one can hear the audience swoon

The filmed musical – or filmed play, or opera, for that matter – is an odd chimera. The grand gestures of a sung-through musical such as Hamilton – a shriek across a deathbed, tearful eyes recounting unrequited love – chafes against the dominant realist mode of contemporary cinema.

In director Thomas Kali’s hotly anticipated recording of the Broadway hit, filmed with the original cast over two nights, the occasional sighting of conductor-orchestrator Alex Lacamoire in the orchestra pit and the ballet rehearsal appropriateness of Paul Tazewell’s costumes work against any notion of sinking into the “movie”.

Generally, Kali is happy to allow the stage show to be just that. As well he might. Hamilton has enjoyed a reach that goes far beyond its stage-bound origins, winning a Pulitzer Prize as well as Tonys and Grammys, topping the rap chart, and inspiring an army of Hamilteens to learn every word.

Singing along to Lin Manuel Miranda’s dizzyingly dense musical – the actor-composer wrote the book, music and lyrics – is no mean feat. Much has been made of the many musical styles: rap, jazz, and soul and punctuated with nods to Gilbert and Sullivan, Rodgers and Hammerstein, and The Beatles.

The text is equally playful. Facts from the source material, a weighty historical biography of American Founding Father Alexander Hamilton by Ron Chernow, are delivered swiftly and playfully. “Martha Washington named her feral tomcat after him”, we’re told.

The trials and tribulations of Alexander Hamilton, an architect of the US constitution and banking system, should never have been enough fun to allow for Jonathan Groff’s purring King George III, the most pouty screen monarch since Miranda Richardson’s Queen Elizabeth I.

There is unrequited love between Hamilton and his sister-in-law Angelica (Renée Elise Goldsberry) and the tragic loss of his son, Philip (Anthony Ramos). There’s a torrid affair and a blackmailer; there are duels and betrayals; busting rhymes and revolutionary fervour.

It’s impossible to recreate the electricity of a live performance but with a musical as beloved as Hamilton, one can hear the audience swoon as Christopher Jackson’s George Washington appears, or when Daveed Diggs’s Thomas Jefferson struts onto the stage.

This filmed version was intended for a 2021 theatrical release. Its early Disney Plus debut brings added weight to Hamilton’s casting of people of colour as the founders of America.

The optimistic notion that the world might just be big enough for Hamilton and his rival Aaron Burr (Leslie Odom Jr) has a new urgency against larger contemporary conversations concerning race in America.

There is, too, Miranda’s unceasing probing of the very nature of history. “Who tells your story?” is a more poignant question than ever, especially coming from Phillipa Soo’s long-suffering Mrs Hamilton.

Hamilton has a reputation for sharing the love with its weekly lottery for $10 tickets and Ham for Ham shows, but there is something magical about its impending democracy. For fans who have never had a chance to see the show, it’s a dream come true.

For the uninitiated, it remains the cultural event of a troubled season. Disney Plus has reputedly suspended all discounts and free trials ahead of Hamilton’s debut on the streaming service. Expect complete internet breakage.

On Disney Plus from July 3rd