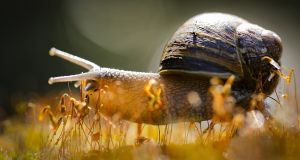 Gimme shell-ter: a snail in ‘A Wild Irish Year’

On A Wild Irish Year (Sunday, RTÉ1) Dr Tara Shine emerges from the mist, binoculars in hand, ready to watch some deer love. How this became a respectable profession is beyond me.

The red deer stags bellow at each other boorishly like radio hosts. The does scatter, muttering something in deerish about the patriarchy, probably. One of the stags wanders around pompously with bits of branch in his antlers, a tactic designed to make him look bigger, but which actually makes it look like he’s wearing a really obvious toupee.

“They’re so impressive with their great big antlers,” whispers Shine.

“Friends tell each other the truth, Tara,” I say, shaking my head at her deception. “He looks like a prize fool.”

A Wild Irish Year is a beautifully filmed nature programme in which an array of soothingly voiced presenters wax poetical about the lovingly filmed animals of Éire. They never once say “Observe this majestic tool” or “This bird is a complete shithead” despite RTE’s much vaunted obsession with balance. Yes, if you want to watch the type of nature programme in which an outdoorsy type blows smoke up a badger’s arse, then this is the programme for you.

Over on the Dingle peninsula, Shine’s colleague Eoin Warner has even involved his gleeful sons in this fauna-flattering business. “Such an experience to be able to share with children,” he says. “These intelligent mammals coming out to meet us.”

For a moment I think he’s talking about the Kerry locals, B&B owners, tour guides, Healy-Raes and the like, but he is, in fact, talking about dolphins who suddenly flock around his boat looking for Fáilte Ireland support grants. Elegiac piano music plays as the dolphins swim and feed. It is, incidentally, the same music that plays when you’re eating sandwiches in the bath.

A Wild Irish Year is a sort of seasonally specific greatest hits of Irish animals. Eels, swallows and red kites make an appearance. A fox squares off against a badger while another presenter, Rob Gandola, looks on, admirably restraining himself from chanting, “Fight! Fight!”. There’s even an interlude about moss, which, I have to say, is the worst animal.

Then Warner goes foraging for blackberries and mushrooms, as if to say, “Is not man, too, a form of wildlife?”

“No way!” I say. “Man’s not wildlife. Man built the pyramids and flew to the moon and fought Thanos. Not personally, of course. I get tired easily, but what have your lot done?” (Full disclosure: at this point I’m directing my tirade at my cat; I wiggle my evolutionary advantageous opposable thumbs at her to annoy her.)

I refocus on the television. Warner is still wallowing in the majesty of nature. “All the food is wild, free, it’s sustainable and tastes great,” he lies, of his berry and fungus hoard.

“You’re not better than me, Eoin,” I mutter, before taking a bite out of a nutritious Wham bar.

All in all, I really enjoyed A Wild Irish Year. What did I like? Well, it looks amazing and, when you get over the idea that they’re giving animals who should probably be in prison an easy ride, it’s very calming. Also, Irish animals are very slow and if I wasn’t so filled with Wham bars I think I could catch most of them (editor’s note: I think you’ve been fooled by slow-motion cinematography).

Crimewatch spin-off Springwatch (Monday to Thursday, BBC2) returned this week to remind us that animals, when not being majestic and mysterious, are duplicitous, ridiculous and disgusting. A collectively binding feat of educational public broadcasting, Springwatch’s narration is, as ever, very entertaining.

“It’s a stunning visual and auditory display, advertising his strength and prowess to the females and telling the males that this bit of shore is taken,” says quiff-plumed presenter Chris Packham of your performance outside Doyles last Saturday. I’m lying. He was talking about a raven showing off near some cliffs.

And there’s more! There’s a fluffy white buzzard baby that looks like, but probably isn’t, Michael D Higgins. Some foxes lounge picturesquely about a graveyard. We learn about the raven’s essentially Tory social policy of feeding the strongest, loudest chicks and letting the rest starve. Gillian Burke presents a sequence about the devastating effect of plastic pollution on sea birds. We witness four coots beat the crap out of each other. “The coot has a dark side to its personality,” says smiley Steve Backshall, reiterating a sentence that has been said many times behind your back.

Then someone sends in a photograph of a coot, probably one of the previous four, drowning a buzzard, holding it underwater with its claws. The coot looks guiltily at the camera. “Oh oh!” its cootish eyes seem to say. “Witnesses!”

Then we get footage of a sparrow hawk drowning a green woodpecker. “This is obviously a method of killing that the sparrow hawk has perfected,” says Packham with a certain amount of admiration.

“Yawn,” says my wife during a sequence about the lapwing. “Birds are more boring than fluffy animals. And insects are the most boring.” For the record, my wife is not a qualified biologist, and this does not represent the most recent thinking in the field.

A lamb starts nosing around the poor lapwing’s nest. Given her cold-eyed animal hierarchies, you’ll be unsurprised to hear my wife sides with the lamb.

“Why did you lay your eggs in a field full of lambs?” says my wife, shaking her head. “What did you expect?”

Two surviving lapwing chicks are shown taking a bit of a post-hatching promenade. “Aaaw,” says my wife, causing us to get into an argument about whether lapwing chicks are birds. “The lapwing is a bird,” explains my wife. “But their chicks are fluffy animals.”

Packham and Strachan are soon showing us photographs of sheep and fallow deer, supposed herbivores, eating lapwing eggs. They all look guilty and it reminds me of that time I caught our vegan friend Seamus eating an egg salad sandwich. Michaela Strachan says something about animal vitamin deficiencies but I just think: “Busted!” and “You’re not better than me” as I tuck into my second packet of Refreshers.

Packham and Strachan then suggest that if anyone watching feels like narking on any other animals they can send in pictures and footage. I film my cat clawing the couch but she refuses to sign the release form. In conclusion, animals think they’re so great but A Wild Irish Year and Springwatch, created by humans with our opposable thumbs and Wham-based diets, actually are.

Lifting the lid on paid-for politics
4

Simon Cowell in surgery after breaking back falling off bike
5