Ismael’s Ghosts: Marion Cotillard turns up, and things get messy

Review: The wife who went missing 20 years ago reappears and introduces herself to her husband’s new squeeze 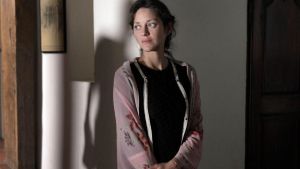 We all like films that ask questions. The weirder and more slippery the questions the better. Right? The problem comes when we’re not sure if the questions we’re asking are the ones the film-maker intends.

Arnaud Desplechin, director of A Christmas Tale and My Golden Years, certainly expects us to puzzle over the unexpected reappearance of a long-vanished wife here. Marion Cotillard’s reappearance is a nice moment.

The resulting tensions push the characters in intriguing directions. It seems unlikely, however, that the film-maker wants us to ask why the rest of the film is such an impenetrable mess.

Decked out in the classy colours of the high-end French art film, Ismael’s Ghosts is probably easier to enjoy if you make no attempt to fit its disjointed units together. Indeed, those who don’t speak French may prefer to ignore the subtitles and wallow in the pretty pictures and elegant production values. The more you try to make sense of it the more intense your headache will become.

Call him “Ismael”. That’s his name, after all. The possible allusion to Herman Melville is less subtle than the clanking gesture to Vertigo. The wife who went missing 20 years ago (Cotillard) is, like the bewitching presence in Alfred Hitchcock’s film, called Carlotta.

Sylvia (Charlotte Gainsbourg), his current girlfriend, is probably named for somebody else, but few will bothered to work out whom. (Though that’s probably one question we are expected to ask.) One day, Carlotta appears blithely on the beach and introduces herself to her husband’s new squeeze.

Oscillating between the presumed present, Sylvia’s first meeting with Ismael and scenes from the protagonist’s latest, awkward espionage drama, the picture is almost certainly meant to seem this pointlessly chaotic. It’s a mirror of the protagonist’s mind. None of that makes it any easier to enjoy.

Still, the excruciatingly indulgent scene – jam-your-fist-in-your-gob embarrassing – that sees Cotillard dancing pointlessly to Bob Dylan’s It Ain’t Me Babe is so appalling it may gain iconic status. I don’t know. Who cares?