An exceptionally gloomy Who Do You Think You Are? introduces the actor to her dodgy forebears 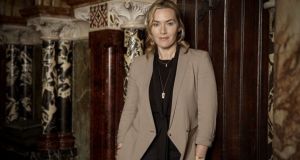 ‘Can you tell me anything nice now?’ Winslet asks one historian

More than most professionals, actors are likely to ask themselves the same question that initiates celebrity genealogy show Who Do You Think you Are? (BBC 1, Monday, 9pm). Their answers, however, are subject to change.

Take Kate Winslet, a murderous New Zealand teenager one moment, a flighty Jane Austen heroine the next, then a bejewelled adventurer on the brand new Titanic who gets hot and heavy with some kid from steerage class. She has thought herself into many different lives.

Curiously, though, the roots of her own identity quickly sink into mystery, as though she failed to do the character work behind playing herself. The child of another actor, she remembers a happy but frugal childhood with, “lots of pubs, lots of booze, lots of actors”.

Conscious, perhaps, that if you measure it in generational terms, you don’t need to delve too deep before acting moves from glamourous to shifty status, Winslet gravitates towards more exotic origins. “We do look Scandinavian!” she approves of one family photograph, taken just one generation earlier, and so it proves.

“I really admire the courage to go and seek your life,” she says of her maternal great great grandfather, a successful Savile Row tailor in 1884 – before learning of a more complicated history, full of poverty, struggle and tragedy, that is somehow much shiftier.

In a Swedish stable, she is moved to hear that her great-great-great grandfather Anders worked in slave-like conditions. Her historian, the first of a procession of gloomy Swedes, interjects, “But it gets worse…”

This is something that Winslet, bracing herself each time, will hear a lot. Anders’s baby died of starvation during Sweden’s 1830s famine. When she learns he was arrested shortly after for stealing potatoes. Winslet is conflicted between instinctive sympathy (“Good on you, Anders!”) and deference to authority: “He wasn’t a plain old thief,” she reasons. “This was a one-off.” Turning a page, the gloomy historian interjects. “Not quite a one-off.”

Anders died in prison, where he was remanded for stealing honey, and such are the cross currents of tragedy that his demise is recorded, the historian points out, “on the next page across from his little boy”.

Always empathetic and alert to somebody’s motivation, Winslet imagines his wife Anna, bereaved twice in six months, and her sadness turns to rage, as though preparing for the role. But it gets worse…

“Can you tell me anything nice now?” Winslet asks another historian, rather hopefully, upon learning that Anders’s son, Johann Christian, a soldier, lost two of three children in their infancy. “I’m sorry,” bows another historian. “Life continues to be hard for this family.”

Johann was discharged for embezzling from the crown and sentenced to public flogging. Starting over again, he turned to tailoring, giving his son the means to later become a success in London.

“Things. Can.Change,” Winslet tells herself, as though willing the show to a positive, less Swedish conclusion. But the show is not finished with her.

“Oh no,” she tells an historian back in England. “No, I don’t like it.” Through a dark joke of karmic symmetry, Winslet’s paternal ancestors were also in the military, where her great grandfather, William Colquhon, enlisted as a drummer boy, conducted public whippings with a cat o’ nine tails.

Realising that her family history reads like Crime and Punishment, but with fewer laughs, Winslet clings to a more encouraging report of an encounter with her ancestor, the way Rose once clung to a floating door while letting Jack slip into the freezing Atlantic.

No longer a public flogger, but a reformed – or rather reforming – character in Dartmoor’s newly progressive prison, William is fulsomely praised in one recorded encounter as a compassionate and intelligent officer.

“How extraordinary to read a description of him,” says a visibly relieved Winslet. “I’m very happy to see this.” No wonder: after a wearying history of drama and tragedy, it’s nice to finally find someone in the family who gets a glowing review.