Westport Chamber Music Festival is back; plus Monteverdi’s ‘The Return of Ulysses’ 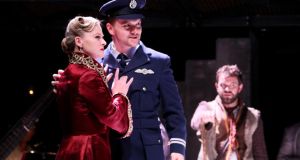 David Adams is not just a staple of the annual organ recital series on the Rieger organ of St Michael’s Church, Dún Laoghaire. He’s the man who regularly gives the closing recital, and he often chooses programmes that are utterly unlike anyone else’s. This year he leaps from the late 19th-century showmanship of Widor’s Marche pontificale to Alberto Ginastera’s 1980 virtuosic treatment of a fifth-century musical fragment, Variazioni e Toccata sopra Aurora lucis rutilat. That’s followed by Mauricio Kagel’s Rrrrrrr . . ., a set of pieces from 1980-81 all bearing titles starting with the letter “r”, and Andrew Johnstone’s arrangement of Astor Piazzolla’s 1962 La Muerte del Angel. You get the idea. There’s no predicting where Adams’s fancy will take him. Works by Enrico Bossi (1861-1925), Girolamo Frescobaldi (1583-1643) and Henri Mulet (1878-1967) complete the evening.

The Return of Ulysses

Claudio Monteverdi, the earliest great opera composer, had to wait a long time for the revival of his stage works. There was a gap of over 250 years from the last 17th-century performance of one of his operas to the first 20th-century concert performance of his Orfeo in 1904. Orfeo didn’t make it to Ireland until 1973, when Eric Sweeney conducted a production for the Dublin Theatre Festival, and performances have not exactly been frequent since then. So if you don’t catch the last two performances of Patrick Mason’s Opera Collective Ireland production of The Return of Ulysses with the Akademie für Alte Musik Berlin under Christian Curnyn, you might have to wait a decade or more before the next Monteverdi production comes along. The title role is taken by Gyula Nagy, with Raphaela Mangan as his long-suffering wife, Penelope.