Sweeter by the dozen: 12 Points heads up this week’s jazz highlights 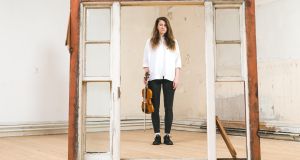 Experimental Irish violinist Ena Brennan – aka Dowry – is one of a dozen fresh-sounding artists performing at this year’s 12 Points festival, running from Wednesday for four nights at the Sugar Club, Dublin

Guitarist Sami Moukaddem is of Lebanese and Brazilian extraction, but he has been based in Dublin since the mid-1980s, and his music is a fascinating amalgam of his background and the various influences he has accumulated over the years. A trained psychologist, the guitarist is currently producing a documentary on depression, and this concert, featuring drum legend Joey Baron, will form part of the finished film. Moukaddem’s quartet also features bassist José Carlos Flores and saxophonist Brendan Doyle, but most interest will inevitably focus on Baron, a major figure in contemporary US jazz who has shared a stage with Dizzy Gillespie, Bill Frisell and John Abercrombie among many others.

Leading Irish saxophonist Michael Buckley starts a new residency off Grafton Street this week with his powerful nine-piece House of Horns band, featuring some of his most regular collaborators, including vocalist Margot Daly, keyboardist Paul Finlay and drummer Jason Duffy. The sound of 1970s fusion groups such as The Brecker Brothers and Steely Dan are the inspiration, but Buckley in particular has the contemporary sensibility to take the music somewhere fresh.

Peripatetic new music festival 12 Points (say it in French and you’ll get the reference) alternates every year between its base in Dublin and another European city. Over the years, this unique boutique jazz festival has visited Porto, Umea, San Sebastián and elsewhere, but 12 Points is back in Dublin this year for its 12th anniversary. The idea is to identify – through open selection – a dozen emerging bands from across the European jazz scene and give them a platform to showcase their music to an audience that includes influencers and opinion-formers from the European jazz scene, including record companies, promoters and journalists. But the most vital ingredient in any 12 Points is an open-minded, generous-hearted local audience prepared to take a leap of faith and check out new bands and new music they have never heard before. In an era where the wearyingly familiar dominates the airwaves and the concert circuit, 12 Points stands out as a beacon of fresh sounds and courageous music making, and should be supported by anyone who wants to hear where European creative music is headed in the 21st century.

So what is the meaning of Lowery’s existential fable ‘A Ghost Story’?
9

Mackenzie Crook as Worzel Gummidge: ‘A lot of things don’t add up’
10