Take us back to church: Hozier and St Vincent make it a divine rock week 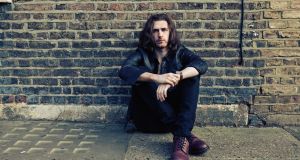 Hozier plays three “intimate live rehearsals” at the Olympia in Dublin on Monday, Wednesday and Friday

Taking over the Earth Ship Stage from 10.30pm until 4am, Fat Puppy is the latest creation from Today FM’s Kate Brennan Harding. With cabaret from Spicebag, live music from MayKay and Whenyoung, music and laughs from Naughty Party, special guest appearances and DJ sets from Brennan Harding, Glamo and yours truly, Fat Puppy promises to leave your tails wagging and your noses wet. If you run on silliness and good tunes, this will hit the spot. LB

With a voice as clear as glass, Lilla Vargen will ease you into the evening at EP. The Northern Irish singer is playing at 4.15pm on Body & Soul’s main stage and if you wander that way, let beautiful songs like Downtown and Hold On wash over you and erase the hangover as you lie down on the grassy slopes of the natural amphitheatre surrounded by pals. That’s the best way to enjoy her music. LB

Dublin-based duo Le Boom are the musical equivalent of rocket fuel. Christy Leech and Aimie Mallon have been putting in the hours this summer, playing festivals in Ireland, as well as Primavera in Barcelona, and winning over new audiences every time. Their fast-paced electro music and magnetic stage presence will certainly put a pep in your step, if you’re in desperate need of some pep. LB

For the first time ever, the Mother DJs will be taking part in the Jerry Fish Electric Sideshow on Saturday night from midnight until 4am for The Mother Midnight Electric Rideshow, playing disco and electronic music, and they’ll be holding their usual Sunday night residency at the Earth Ship Stage in Body & Soul from midnight until 4am. They’re an essential part of the EP experience, so let their Sunday gig finish off your festival with a bang. LB

It will be a very busy September for the people that bring you Other Voices. It pitches its always-stylish tent in Ballina, County Mayo, takes place at the end of the month (28th/29th), but before that OV stops at Stradbally for what is now the event’s annual outing at Electric Picnic. Across the weekend, the line-up delivers a large number of Irish acts (including Columbia Mills, David Kitt, Dowry, Seamus Fogarty, The Lost Brothers, The Murder Capital) supplemented by Welsh singer Gwenno, Australian performer Stella Donnelly, and French alt.pop singer Halo Maud. A pleasure and a surprise, OV is always a must-see/must-hear experience. TCL

Brighton’s Michael Rosenberg may once have been touched by the commercial King Midas that is Ed Sheeran (who he has been friends with since he was a teenager), but that was several years ago. Back in 2014, when his song Let Her Go was nominated for a BRIT Award (for British Single of the Year) it was assumed that his friendship with Sheeran had steered the public in his direction, but subsequent years (and songs) have proven Rosenberg to be his own person. A prolific songwriter (he has released nine studio albums in the past 10 years), he has just released his latest, Runaway, which sees the UK singer veer ever closer to America in terms of style and instrumentation. TCL

It’s a welcome return for Annie Clark, aka St Vincent, following her Olympia theatre solo gigs almost a year ago. Whether a performance slot on Electric Picnic’s Electric Arena will have as much of the intimacy (and fragility) as those theatre shows remains to be seen, but if there’s anyone that can bridge the gap between warmth and space then it’s this woman. Her latest album, Masseduction, will be heavily drawn from, and frankly, we’re already tingling in anticipation. TCL

To those who are thinking of walking up to the venue in the hope of buying a ticket and then ambling in – forget it, bud. Tickets for these three exclusive shows sold out in a heartbeat, which is no surprise considering that Hozier is the most commercially successful music act Ireland has produced in many a year. The official word is that the gigs are “intimate live rehearsals”, which means that, alongside tracks from the musician’s 2014 self-titled debut album, we will most definitely be treated to new material from the forthcoming follow-up. All proceeds from the three shows will go to charities close to Hozier’s heart: Safe Ireland, One In Four, and the Peter McVerry Trust. Hot-ticket gigs of the week, no question. TCL

Singer-songwriter Brent Cobb has marked the cards of those who admire taut, forlorn tunes of the roots/country/soul variety. Those admirers include the likes of Little Big Town, Miranda Lambert and The Oak Ridge Boys, each of whom wanted a piece of the Grammy-nominated songwriter’s wares for their own records. With a songwriting style that has been described as blue-collar, and a voice that has been compared to Merle Haggard, Willie Nelson and Al Green (“soft and sweet, with surefooted hints of soul,” sayeth the Nashville Scene), Cobb’s sensitive songs will cause brimming eyes to be dabbed dry by paper tissues. TCL

Notwithstanding a hiatus of 13 years between 1997 and 2010, being in a band by the name of Ugly Kid Joe since the late 1980s might just get to a person; but not, clearly, long-term members Whitfield Crane, Klaus Eichstadt, Cordell Crockett and Dave Fortman. Still plugging away in the hard rock/metal zone, the band has managed to offset any major commercial disorder by taking the crowdfunding route. Their fan-financed 2015 album, Uglier Than They Used Ta Be, was received positively (“Their catchy hooks and solid vocals are cool to like again” – Exclaim magazine), and their fanbase covers a few decades, so expect to see a cross-generational crowd getting messy at these shows. TCL

If you somehow make it to Peking Duk’s gig in the Grand Social after a heavy weekend down in Stradbally, then you’re either incredibly brave or incredibly stupid. While everyone else will be taking it easy this week, the Australian electro duo of Adam Hyde and Reuben Styles will be doing anything but. If the post-EP weepy Wednesday hits you, the poppy elements used in songs like Fire and Wasted will be an instant feel-good hit. LB

Screaming Females began writing and performing songs more than 10 years ago in basement bars in their hometown of New Brunswick, New Jersey. As the years passed so their profile grew, and support slots to the likes of Garbage, Throwing Muses, The Dead Weather and Arctic Monkeys inevitably brought them out of the shadows. Albums from 2006 debut Baby Teeth to this year’s All at Once have showcased not only the band’s forceful rock music but also how good a guitar player lead singer Marissa Paternoster is. Special guests are Alien She, a Dublin trio whose 2017 debut album, Feeler, went unjustifiably unnoticed. TCL

“Upbeat indie meets dirty pop from the north of England” hardly does justice to Leeds-based band Marsicans. They may have friends in high places (Coldplay posting a link of a Marsicans music video to their 19 million Twitter followers, BBC Radio 1’s Huw Stephens playing their music), but the band has remained level-headed about such a spike in profile. Apart from being recognised in branches of Subway, it is heads down all the way to recording and releasing more songs. These shows, their debut performances in Ireland, are associated with such activities, so don’t keep them out too late, you hear? The band has things to do, and places to go to. TCL

If you’re worried about the state of modern punk, then look no further than Iceage. The last time the Danish punk band played in Ireland, lead singer Elias Bender Rønnenfelt decided to shame someone in the crowd for using their phone during the gig. That’s right. He called them out and the person learned their lesson with Iceage: pay attention or get ready to be called out for it. So if you make it to Workman’s, don’t let your eyes wander. LB