What the ‘Abba reunion’ news really boils down to: not much

They’ve recorded two new songs. One will be performed on TV in December. Not by Abba 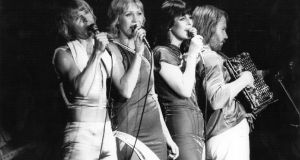 That story that Abba have “reformed”, “reunited” and recorded new music together had a giddy global reach over the past few days.

Acres of newsprint and online coverage was given over to the band; it vied for attention with the talks between the two Koreas. In major cities of the world, the fan on the street was asked to respond to the news.

A little fuss is understandable: Abba occupy a preeminent place in the popular culture psyche; their sublimely composed pop music is as beloved now as it was in their 1970s heyday – if not more so.

The more probing news outlets read the small print or dug a bit deeper – they didn’t have to look far. Abba’s manager, Görel Hanser, in announcing the news had been quite clear in saying that the two new Abba songs I Still Have Faith In You and Don’t Shut Me Down would not be performed by Abba; they were written for the band’s upcoming 2019 Hologram tour only.

So if they’re not reuniting, what is going on? And what on earth is a hologram tour?

“The two songs will only be part of the hologram tour – the members of Abba won’t be appearing physically,” said Hanser. Furthermore, the manager said that no other songs would be recorded and that Abba – now mostly in their 70s – will not be touring again. The group split up for good in 1982.

As music business PR, the “there are two new Abba songs” story did its job. But why all the fuss over an announcement made in April 2018 that of two songs recorded in June 2017, one of them will feature – and only performed by Abba holograms in an Abba tribute TV show due to be screened in December 2018?

The answer most likely lies in the other bit of Abba activity that took place last week but went largely unreported. As the world was getting its sequined outfit in a twist about “Abba reforming”, one of the band’s songwriters, Björn Ulvaeus was in Brussels pleading with the European Broadcasting Union (made up of Europe’s public media service outlets, including RTÉ) to sign up to show December’s Abba tribute TV show.

This will be the first time the public will see how the virtual reality Abba – the “Abbatars” – will work. And, by extension, to see if the upcoming Abbatar tour could actually work at the box-office.

Ulvaeus talked up the Abbatars like a door-to-door salesman: “What I’ve seen so far is simply mind-boggling. These Abbatars will sing the songs – lip sync them. And you won’t be able to see that they’re not human beings. It’ll be spooky, I assure you.

“It’s us as we were in 1979 when I think we looked our best. No one has done this before. There is an existential dimension to explore here as well: what would it be like to be young again.”

The December TV tribute is a joint co-production between BBC and NBC. Ulvaeus added: “The BBC and NBC have a global reach. The plan is to make this a global television moment and they are now reaching out to top national and regional broadcasters like yourselves who can be a part of making it a shared experience all around the world. I can’t help thinking. It would be a bit like the Eurovision Song Contest”.

Clearly, Ulvaeus wants as big a TV audience as possible for the December show. As of now, no venues or ticket prices have been released for the Abbatar tour.

Silicon Valley companies, and Abba themselves, have sunk money into this global tour – an ambitious project. When it was first announced last year, there was much talk about how the band “were looking to reimagine the live entertainment economy with this virtual tour” and “exploring a new technological world with virtual reality and artificial intelligence at the forefront to create a new form of entertainment and content not previously imagined”.

So perhaps no coincidence then that 24 hours after Bjorn Ulvaeus was trying to convince European TV stations to screen the show in December, there was news from Stockholm that Abba had “reformed” to write two new songs for the first time in 35 years.

There are successful musical Hologram tours out there already – a Roy Orbison hologram has just played to a full house at Dublin’s Olympia Theatre – but the 2019 Abbatar will most likely be aimed at 8,000 plus capacity arena venues. There are rumours that the Abbatars will be performing at Glastonbury 2019.

But 400 million album sales or not, Abba are returning, albeit virtually, to a very changed music world than the one they left in 1982.

Even the biggest of bands have to make a lot of noise if they want a new release or tour – or virtual tour – to be talked about.

Even The Rolling Stones aren’t immune. Mick Jagger has been in the Irish media in the past week talking about how wonderful his band they are. There are still tickets to be sold for the band’s show at Croke Park on May 17th and Jagger is a bottom-line sort of guy.

And this is the other problem facing the Abbatar tour next year. The members of Abba are still collectively younger than the members of the Rolling Stones. But it’s the older outfit that is touring in real life, the younger one going out as holograms.

Bands now routinely tour in their 70s, whereas in Abba’s day you were already a “vintage” act once you hit 30.

Since they split in 1982, Abba have always consistently said they would never perform live together again. Some years ago they even turned down a world record offer of $1 billion to reform for a run of festival shows.

If this TV tribute show doesn’t do the business for them and there are still tickets that need selling for their Abbatar tour next year, they’ll be reaching for the spandex and the platforms before you can sing the chorus to Money, Money, Money.