It helps, of course, that most of what was on offer was what you would call bankable fare 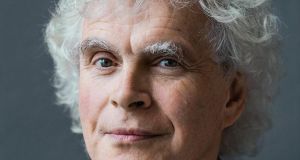 Simon Rattle. I found a huge amount to admire in the LSO’s performance of Mahler’s Ninth Symphony under Rattle.

It’s probably a combination of factors that has had me thinking about audience sizes. There was the announcement of the redevelopment of the National Concert Hall, which is to bring the hall’s capacity up to 1,350. The well-attended first full-scale new production from Irish National Opera in Wexford and Dublin. And the fact that a slew of concerts I’ve attended over the last month or so have been well attended, from the Royal Irish Academy of Music’s Opera Briefs at the Abbey Theatre’s’ Peacock Stage, to Music Current at Smock Alley Theatre, the singers of Belfast’s Sestina with the Irish Baroque Orchestra at Christ Church Cathedral, and the London Symphony Orchestra and the RTÉ National Symphony Orchestra at the National Concert Hall.

And then there was the taxi driver who struck up a conversation about the NCH and was able to tell me the hall was well filled for the Guinness Choir in Bach’s Mass in B minor there, too.

This is obviously not a scientific survey, and, to be fair, when I look at what was on offer in some of the concerts I missed I can’t imagine they all drew full houses. But the fact that five nights of a home-generated opera production, two symphony concerts (one with the high prices associated with visiting orchestras) and an ambitious amateur choral presentation can attract close to full houses within an eight-day stretch suggests that the lifting of the great recession is finally being felt by classical promoters.

It helps, of course, that most of what was on offer was what you would call bankable fare. Why wouldn’t people want to hear Simon Rattle in Mahler and Nathalie Stutzmann in Rachmaninov and Brahms in the same week. Why wouldn’t they flock to one of the greatest operas from a new national opera company fielding a largely Irish cast?

Well, for some years now, those outcomes would not have been givens. When John Wilson was successfully lifting the RTÉ Concert Orchestra onto a new artistic plane, I heard complaints from within the NSO that he was stealing their audience. And when the NSO found itself in competition with a visiting orchestra it was usually the RTÉ orchestra that came off second-best.

Both the NSO and the NCH will be announcing their new seasons in a short while. The NSO’s offering will have been programmed in the midst of the uncertainty that has been surrounding future or orchestral provision by RTÉ. And there are other negatives, too. The post of principal conductor is still vacant, and the core playing strength is still depleted making the orchestra reliant on deputies.

It will be interesting to see how all those factors will be balanced by Anthony Long, the general manager whose surprise appointment was made just a year ago. For him the new season will be the first he will have conceived more or less from the ground up.

The National Concert Hall’s International Concert Series (which fulfils the function of the former Celebrity Series) has gone through recession-influenced changes. In terms of what you might call musical glamour or star appeal it has backpedaled somewhat. But, under Simon Taylor, who became the hall’s chief executive in 2011, it also broadened its musical focus. It has embraced choral music, included offsite concerts, and moved away from long-standing rigid patterns to a more flexible and open perspective.

While the boost in attendances is a good thing, I wouldn’t actually argue for full houses as any a kind of holy grail. Quite the opposite in fact. Back in the days when Wexford Festival Opera used to sell out months before its opening night, that very success became a barrier to developing its audience base. The same cohort of privileged supporters had first pick of the tickets and it was difficult for first-timers to get access to the Wexford experience.

The same issue used to affect the Glyndebourne Festival in Sussex. It used to be possible for performances to sell out without any tickets reaching the public. And I can still remember my astonishment reading about Germany’s Bayreuth Festival in the 1990s. Demand was up, the news report said. It had gone from seven times total capacity to 10 times the number of available seats. Tickets for the public were allocated by lottery.

That said, there’s no denying that the full houses generated a special buzz for the Rattle and Stutzmann concerts last week, and I have a suspicion that my response to the music-making will put me in a very small minority. I found a huge amount to admire in the LSO’s performance of Mahler’s Ninth Symphony under Rattle. But I actually enjoyed Stutzmann’s concert much more, even though it’s indisputable that the quality of the NSO’s playing was in many ways just not in the same league as the LSO’s.

Simply put, I found aspects of Rattle’s Mahler over the top. Perhaps the orchestra was too often simply making more sound than the NCH’s acoustic could comfortably handle. Perhaps I was in the wrong listening mode. I had been working on talk about Mahler and had spent a lot of time with early, less blatantly virtuosic recordings by conductors close to the composer, Bruno Walter, Willem Mengelberg, Oskar Fried and Otto Klemperer.

Don’t get me wrong. There were wonderful moments of all kinds in Rattle’s approach, and the performance ran to calm introspection as well as neurotic intensity. But some of the brilliance came to seem like a thing in itself, no longer fully at the service of the music. It’s not a feeling I’ve had at any of Rattle’s previous Dublin concerts.

By comparison, the sound of the NSO was almost homely, but homely with real heart and well-centred musical balance. Russian pianist Vyacheslav Gryaznov cleared away the undergrowth in a well-structured account of Rachmaninov’s Second Piano Concerto. And Stutzmann brought both weight and persuasive fire to Brahms’s First Symphony. You can expect Stutzmann’s last concert of the season, Brahms’s Nänie and Beethoven’s Choral Symphony on Friday, May 25th, to be a sellout, too.