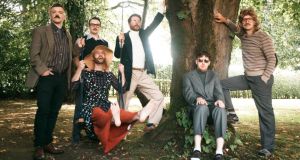 On a summer afternoon in Kildare in 1998, a woman was hit by a vehicle in the car park of Newbridge shopping centre. My mate Brett and I saw it happen. It was low speed, minimal impact, but the car knocked her right over, and it looked like it was at least sore.

Once the gawkers had dispersed, and the woman had picked up her messages and left the scene, we strolled by. Brett made a lunge for a £20 note on the ground, probably dropped in the accident. The woman was gone, and we didn’t know who she was, so, having watched the video for Beastie Boys’ Intergalactic on MTV that morning, we went straight to the Top Twenty music store in the shopping centre and bought their album Hello Nasty on tape.

That summer of ’98 was a coming of age: sun, cider, shifting, Kildare winning their first Leinster title since 1956, and getting beaten up by a huge farmer lad from Confey while I was playing for Sarsfields. Hello Nasty was the soundtrack to all that madness. It expanded my musical mind. The diverse sampling, the 808 drum machines, so many classic one-liners, Mix Master Mike’s scratching, Adam Yauch’s sensitive side on I Don’t Know. It was an album that had so much to give, and in my head it broke down creative boundaries I didn’t realise were there. – In conversation with Niall Byrne