Paddy Hanna: 'You have to exorcise things like guilt and regret' 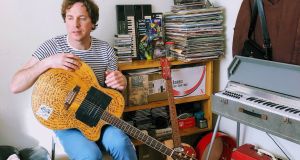 Paddy Hanna accepts that he has made an album that takes time to get to know, but one that is possibly his most beautifully-crafted.

Much like his music, you never know quite where a conversation with Paddy Hanna will take you. One minute you’re discussing the serious lyrical themes of his new album The Hill; the next, he’s espousing the virtues of his Italian zombie film collection. If it was anyone else, the two topics might seem obviously unrelated – but not with Hanna, who has forged his career on affable eccentricity.

Hanna is also an entertaining conversationalist, refreshingly frank about things that many other musicians would shy away from – either through fear of sabotaging sales, undermining their reputation or simply exasperating their manager. For example, he has no problem admitting he was disappointed (and a little annoyed) that his last album, 2018’s Frankly, I Mutate, was not included on the shortlist for that year's Choice Music Prize. It’s an admission borne not solely out of vanity, but mostly out of ambition.

“I think when you take on a project, it’s important – in my opinion – to work truthfully,” he admits. “In other words, you have to work in the mood and mindset that you were feeling at the time. With Frankly I was feeling a little ambitious, but with this one, I was kind of broken. I was crestfallen. I felt that Frankly in many ways, was kind of a failure. You feel that way, as an artist: you’ll get all these nice reviews, but you’ll get one 6/10 review and that’s you done,” he laughs.

The beginning of The Hill, he adds, was a consolatory phone call from producer Daniel Fox. “He said ‘so, we’ll make another one’. The spark for this album was one of helping you to get over feeling like shit. That’s kind of the energy of the record, really. I had to be realistic with where I was at that point.”

Hanna has been open about his mental health struggles in the past, and admits there was a low period before he began making his third album.

“Slowly, I was not being able to look at myself in the mirror anymore – and every time I’d catch myself in the mirror brushing my teeth, or whatever, I started noticing that my eyes were getting less bright,” he reveals. “Literally, the light was going out of my eyes. So the question was do you make a record that’s like Katrina and the Waves and dance your way out of the gloom? Or do you ask the question: Why is the light going out of my eyes? So I guess that’s what we decided to do.”

Hanna came to prominence on the Irish indie scene as an architect of quirky indiepop in bands like Grand Pocket Orchestra and has played various in numerous other acts over the years (he is still a member of impressive art-pop band Autre Monde). His songwriting prowess first came to the fore in thrilling fashion on his 2014 solo debut, Leafy Stiletto. Its follow-up, Frankly, I Mutate, may not have performed how he wanted it to from a commercial standpoint, but was another excellent collection of imaginative, sophisticated and singular indiepop songs.

This time – perhaps given the circumstances, or maybe with a sense of throwing caution to the wind – Hanna has inverted his musical compass once again for something more sultry and seductive.

That meant once again linking up with Frankly, I Mutate’s producer Daniel Fox, best known as bassist in Dublin noise-rockers Girl Band. He recalls their first meeting in JJ Smyth’s pub several years ago, and the instant realisation that they would work well together.

“I’d gotten sick of being ‘wacky’ and I wanted to make a straight-up guitar record, like drivetime stuff – and that turned out to be Leafy Stiletto,” Hanna explains. “But when it came to doing Frankly, I thought okay, the strings need to come out, the brass needs to come out. And to make that kind of step, I kind of needed someone new. It needed to be a new dawn, as it were.

“In the back of my mind, I was thinking I really wanna work with the Girl Band lads – wouldn’t it be cool if I could get them as my backing band, or something? It was real pie-in-the-sky stuff. Mind you, I got the rhythm section, in the end. So y’know, I’m halfway there.”

Indeed, Fox and Girl Band drummer Adam Faulkner both play on The Hill, which was recorded in west Cork in May 2019. Hanna describes the album – which sounds very different to anything either he or Girl Band have done in the past – as “a distillation of many concepts that I had that I never really had the guts, in many ways, to use. In a couple of cases, some of the songs were ones I’d been sitting on for years, thinking ‘There’s not a place for any of these songs’. So thematically, that’s why I love working with Daniel – he leans into the crazy.”

It took until several days into the recording process for him to have a dawning realisation about the album’s overarching theme.

“When we made the record, I don’t feel that I had personally healed myself,” he admits. “Although we went in with the songs all written, thematically I wasn’t entirely certain of why all these strands were together on the record. It became almost like a mystery: why, for example, is a spoken word song about doing the washing mixed with an instrumental track that sounds like it’s out of an Italian cannibal movie? We were hitting the beers a lot while we were making this album, so we’d be fairly in the bag by 2am,” he adds, laughing.

“AndI’m dyslexic, so I have a dyslexic writing style. You don’t know what you’re writing until you lay out all the bits of the puzzle and you assemble it. I finally put all the pieces of the puzzle together on like, the fifth day of recording, and I was super excited. I was like, I finally know what this album’s about. And that was a cool moment.”

He speaks passionately about the idea of your past affecting your present and future and how growing up in Catholic Ireland in the 1980s and 1990s had an effect on him, describing it as a way of “trying to exorcise the demons of the past in order to go into a more positive future. You have to exorcise things like guilt and regret – which is probably why there’s a lot of horror film strands that run through the album as well.”

Undoubtedly, The Hill is  incredibly atmospheric; the horror influences can be heard from the opening track (Last of Their Kind) to the album’s final note. Those two years spent “doing nothing but watching Italian zombie films” from the age of 19 to 21 finally came in useful, he notes.

“Horror films, or horror in general, is one of the best way to express emotions on a grotesque level,” Hanna points out, citing Carrie, Dracula and The Exorcist. “So I wanted to play with these fears that I had, and create a sort of thinkpiece.

‘On the first listen’

Hanna is still not quite sure whether the whole album-making process, which he has described as “his therapy” has been a cathartic one. “Well . . . let’s wait and see what the critics think,” he says, perhaps only half-joking. “Nah. I mean, yeah . . . I guess so? I like the idea of creatively never being fully satisfied.

“I read about Dave Stewart and his ‘paradise syndrome’, and I live in fear of that: the idea that you’ve done everything you needed to accomplish artistically and then you’re done, so then you go and form SuperHeavy,” he sighs, referring to the supergroup Stewart formed with Mick Jagger, Joss Stone at al. “And I don’t wanna be in SuperHeavy.”

Until then, he accepts that he has made an album that takes time to get to know, but one that is possibly his most beautifully crafted, thoughtful work to date. And if it doesn’t hit big? There’s always the next one.

“I don’t think you’re gonna be bowled over on the first listen,” he admits. “But if you listen to it a couple more times . . . which, by the way, all my favourite albums are like that: Alice by Tom Waits, Geogaddi by Boards of Canada – two albums that I returned to the shops the first time I heard them.

“The one thing I’ll say is that when I presented the record to [Strange Brew Records label boss] Gugai, he was a little quiet at first. Then he got really excited over time, because it’s a real slow-burn record. He said to me: ‘Congratulations on the album – but for the next one, could you give me a few hits?”

Hanna laughs, then sighs with a sense of comic drama. “Alright, I can do that – why not?”