Will it pivot from David Agler’s taste for still alive composers and underuse of Irish talent? 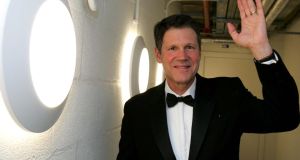 David Agler: has been in situ at Wexford since 2005 but will retire after the 2019 festival. Photograph: David Sleator

The festival has had its fair share of ups and downs. It survived a major internal turf war in the 1960s which led to the departure of one of its founders, artistic director Tom Walsh. Walsh’s nemesis was Alfred Beit, whose bankrolling of the always hard-up festival gave him leverage to interfere in artistic matters.

Wexford’s loss was everyone else’s gain. Walsh, who was in his mid-50s when his struggles with the festival reached their peak, used the time liberated by his departure from the festival to write books about the history of opera in Dublin, Paris and Monte Carlo.

The festival survived the crisis without shutting down, as some seemed to have expected, and without any interruption of service. Some 20 years later, in 1986, it weathered a huge cut to its Arts Council grant. And, early in the 21st century, it held firm over its 2001 decision to replace its Irish pit orchestra, the RTÉ National Symphony Orchestra, with the National Philharmonic Orchestra of Belarus and later, in 2004, with the Cracow Philharmonic Orchestra.

Money was saved, the festival flourished. But the reputational damage was considerable. The imported orchestras did not perform as well as their Irish counterparts. And behind the scenes the festival was locked in a struggle about what an internal Arts Council memo from 2004 described as “the council’s concern over the almost total absence of Irish artists and opera practitioners employed by the festival”.

The current artistic director, David Agler, has been in situ since 2005 and will retire after the 2019 festival – applications for the job closed just under two weeks ago. He once explained to me in detail why Wexford could never again afford an orchestra of Irish musicians. The issue was about the proportion of the budget that any opera company could afford to spend on orchestral services.

But it did not take him long to see the light and by the time the festival opened its new, custom-built home in 2008 there had been a U-turn. The creation of a mostly Irish Wexford Festival Opera Orchestra certainly went some way to easing the tension between the festival and the Arts Council.

Wexford went through a challenging time after the opening of its award-winning venue, the inappropriately named National Opera House. October 2008 was an inopportune moment for any expensive, sponsor-dependent event to find itself gearing up to manage the greater audience capacity of a prized new performance space, even if it did have the upside of having been funded largely from the public purse.

The original plan for that venue, 18 successive nights of opera every year, has never quite got back on the rails. All 18 nights were given in 2008, but the 18 initially announced for 2009 were reduced to 12 and it was not until 2016 that better times allowed an extension to 15 nights.

But the festival had other irons in the fire. It was central  to the Arts Council’s so-called Shannon plan of 2009, which would have seen opera in Ireland centralised in Wexford. The plan was rubbished by then minister for arts Martin Cullen, who replaced it with his own, never-to-be-realised vision of a new national company.

The festival also bid unsuccessfully for funding from the opera production awards the Arts Council set up in 2012 after Dublin’s major opera provider, Opera Ireland, bit the dust because of Cullen’s plans. And it teamed up last year with Kilkenny Arts Festival’s director, Eugene Downes, in a competitive process to become Ireland’s major opera provider. But it lost out to the joint Opera Theatre Company/Wide Open Opera proposal that led to the creation of a new Irish National Opera company.

The festival’s long-standing, high international reputation is based on its resuscitation of long-neglected and forgotten works

Wexford’s opportunities to dominate Ireland’s opera provision both came to naught and it’s hard to see any similar openings arising in the future. And, although the Arts Council’s opera production awards are continuing in tandem with funding for INO and Wexford, both companies are now excluded from applying for those awards.

The world of international opera has also been changing in ways that impact on Wexford. The festival’s long-standing, high international reputation is based on its resuscitation of long-neglected and forgotten works. But lesser-known works have become a growth area, to the point that Wexford now finds itself in competition with more companies than ever before.

David Agler’s solution was to introduce a strand of English-language operas, a significant proportion of them from his home country, the US. He has also espoused English-language works by living composers. In the 54 festivals before his arrival, there had been just three works by living composers. Over his 14 festivals he has added another seven to the list and a further three in the smaller-scale ShortWorks productions.

That repertoire strand may all disappear now, as may the festival’s still problematic attitude to the hiring of Irish singers and creative teams, most of whose work on the island of Ireland Agler chose never to hear or see.

Wexford will have a new artistic director from 2020. It will be a moment of major change. The big question is in which direction the festival board will decide to go.