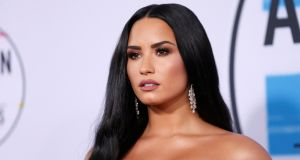 Singer and actress Demi Lovato was taken to a Los Angeles hospital on Tuesday suffering from a suspected overdose. File photograph: Danny Moloshok/Reuters

US pop singer Demi Lovato is awake after she was taken to a Los Angeles hospital on Tuesday suffering from a suspected overdose, according to media reports.

“Demi is awake and with her family who want to express thanks to everyone for the love, prayers, and support,” Lovato’s representative said in a statement.

“Some of the information being reported is incorrect and they respectfully ask for privacy and not speculation as her health and recovery is the most important thing right now.”

Entertainment news website TMZ, quoting law enforcement sources, reported that Lovato was found unconscious at her home and was treated with Narcan, an emergency antidote for suspected opioid and drug overdoses.

Los Angeles police said they had responded to a medical emergency on Tuesday involving a woman on the Hollywood Hills street where Lovato reportedly has a home but declined to identify the person.

City fire department spokeswoman Margaret Stewart said a 25-year-old woman was transported to a local hospital from that location.

The New Mexico-born performer rose to fame on Disney Channel shows Camp Rock and Sonny with a Chance 10 years ago and forged a pop career with hits like Skyscraper and Sorry Not Sorry.

In a 2017 YouTube documentary, Simply Complicated, Lovato spoke about years of substance abuse, eating disorders, and drinking, saying she first started using cocaine when she was 17.

She entered rehab at the age of 18, where she was diagnosed with bipolar disorder.

Lovato, who has some 69 million followers on Instagram, was in the midst of a US tour and was due to perform in Atlantic City, New Jersey, on Thursday.

Her hospitalisation became the top trending item on Twitter on Tuesday, with fans and celebrities expressing concern and support.

Country singer Brad Paisley tweeted: “Addiction is a terrible disease. There is no one more honest or brave than this woman.”