Eight of the best songs from July you have to hear 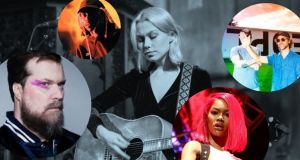 Jealous of the Birds – Russian Doll
Having started her musical output with lo-fi acoustic folk, the Portadown artist Naomi Hamilton has moved on to increasingly rockier territory in the last three years, as heard on her debut 2016 album. Her latest EP The Moths of What I Want Will Eat Me in My Sleep brandishes a confidence in writing razor-sharp indie-rock-leaning pop songs that have that earworm effect.

Teyana Taylor – Rose in Harlem
The dusty whirlwind that was Kanye’s Wyoming albums, which saw the controversial rapper produce and feature on five separate records, alongside Kid Cudi, Nas and Pusha T, has now settled. The last of the five, from the R&B singer Teyana Taylor, suffered the most from the rushed approach, with a chaotic release. Which is a pity, because the album K.T.S.E is a fine collection of modern R&B with plenty of Kanye’s old-sampling soul in it, exemplified by the exquisite Rose in Harlem.

Marquis Hawkes – We Should Be Free feat. Jamie Lidell
The golden soul voice of English singer Jamie Lidell doesn’t get utilised on joyful dance music as much as it should. Which is why this feature on Berlin-based UK producer Marquis Hawkes is such a delight. It’s a seven-minute house track on which Lidell puts on an exalted and transcendental soul singer show.

John Grant – Love Is Magic
One of the musicians who Ireland seems to hold a strong bond with, John Grant, is back with news of his first album in three years. Love is Magic arrives in October with track titles like He’s Got His Mother’s Hips and Smug C—t. The title track suggests increasing shades of synthesizer pop reoccurring in his often, wickedly humorous dark ballads where “Sade is playing on the radio,” “there’s no milk in the refrigerator,” as the singer explores our need for love and our inability to shoulder it.

Phoebe Bridgers – The Gold
The Los Angeles singer-songwriter transforms the Georgian indie rock band Manchester Orchestra’s biggest track by melting away the harmony and reconstructing it with delicate notes, echo and lilting guitar. “You and me, we’re a day drink/ So lose your faith in me,” Bridgers sings, giving the ending of a relationship a bittersweet landing.

Big Red Machine – Forest Green
The National’s Aaron Dessner and Bon Iver’s Justin Vernon first collaborated on a 2008 charity album, Dark Was the Night, before they met in person. Since then, the pair have worked on the project at their various collaboration-heavy festivals under the banner PEOPLE at places like Eaux Claires in Wisconsin and Sounds From A Safe Harbour. An album was subsequently recorded and from it, and a trailing EP, is this lush and rolling heartwarmer.

Blood Orange – Charcoal Baby / Jewelry
Quite how Dev Hynes went from NME joke band Test Icicles to one of the foremost black songwriters and producers in R&B and pop is something worth pondering, but the music world is all the better for it. Continuing the theme of his 2016 album Freetown Sound, new songs from the upcoming Negro Swan release explore “ the many types of black depression… and the ongoing anxieties of queer/people of colour.” It’s billed as a hopeful collection of songs and one which is closest to Solange’s critically-acclaimed and A Seat At The Table in its suave tone.

Daithí featuring Paul Noonan – Take The Wheel
Daithí O’Dronai’s electronic pop has moved into deeper and richer places over the years but none more than this song featuring the Bell X1 singer on vocals. Inspired by loss and the breakup of a relationship, Daithí wrote his most personal music to date and one of the results is this sweeping and pulsing songs that is both elegiac and epic.

The Great British Bake Off: Who’ll take over from Sandi Toksvig?
9