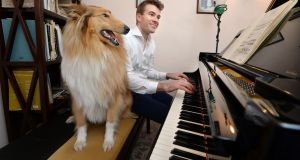 Benjamin Appl
NCH Kevin Barry Recital Room, Dublin 3pm 15 nch.ie
On the evidence of the number of concerts he has been giving here, the highly acclaimed Benjamin Appl is the German baritone that Irish audiences are most in love with at the moment. He’s back again, in partnership with Dearbhla Collins, to close the Dublin Song Series at the NCH with a performance of Schubert’s great cycle, Winterreise. What’s not to like?

West Wicklow Festival
Russborough House & Parklands; St Mary’s Church, Blessington, until Sunday westwicklowfestival.com
The West Wicklow Festival is the brainchild of pianist Fiachra Garvey, who describes himself as having grown up as a farmer and pianist in Ballyknockan. The 2018 festival summarises itself as eight artists (Garvey himself, clarinettist Julian Bliss, cellist Philip Higham, baritone Gavan Ring, and the Benyounes String Quartet), four days, and 16 composers (Beethoven, Debussy, Poulenc, Brahms, Haydn, Debussy, Schumann, Schubert, Bach, Rossini, Verdi, Quilter, Chopin and  Vaughan Williams, to which you have to add the arrangers of a number of Irish songs). Everything bar the closing concert takes place in stately surroundings of the recently refurbished Russborough House.

RTÉ NSO/John Storgårds
NCH, Dublin, 7.30pm 15-35/13-31 nch.ie
It’s a bit like a lap of honour. The Dublin International Piano Competition gets to highlight its previous winner right at the start of each new competition, courtesy of the RTé National Symphony Orchestra. So, on the very day this year’s competition starts at the RDS, Nathalia Milstein, the 2015 winner, teams up with the NSO at the NCH for a performance of Mozart’s mostly mellow Piano Concerto in A, K488. The remainder of the concert, which is conducted by Finnish conductor John Storgårds, is devoted to Mahler’s Sixth Symphony, the one that is sometimes nicknamed the Tragic. MD