Eurovision 2018: 10 songs that could win the contest 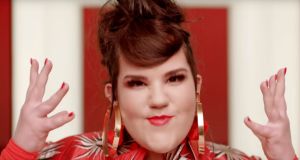 Israel’s Netta Barzilai bursts out of the blocks like the kimono-wearing offspring of Bjork and Meghan Trainor.

Netta Barzilai - Toy
From dancing grannies to bearded ladies, the WTF bar is set preternaturally high at Eurovision. The latest performer to take a running pole vault over it is Israel’s Netta Barzilai, who bursts out of the blocks like the kimono-wearing offspring of Bjork and Meghan Trainor. The chorus here is a chicken impersonation. A literal chicken impersonation with noises and actions. The song is, naturally, the runaway favourite to win. Hear it here.

Madame Monsieur - Mercy
French entry Mercy (with a ‘y’ rather than an ‘i’) is about a baby born to African refugee parents aboard a rescue ship in the Mediterranean. It’s a moving true story. But given the political climate in Eastern Europe, not a guaranteed vote winner. Get with it, France, we’re all about animal noises this year! Hear it here.

Alexander Rybak - That’s How You Write a Song
The baby-faced winner of Eurovision 2009 returns with all the subtle understatement of a pepped up Nickelodeon child actor delivering a Ted Talk. The Norwegian entry is not so much a generic pop song as a generic pop songwriting tutorial: “Step 1: believe in it and sing it all day long / Step 2: roll with it...” (Wait, we’re on Step 1 and the song is ALREADY WRITTEN? I’m hugely confused, Ted.) Hear it here.

Ryan O’Shaughnessy - Together
It’s five years since Ireland got past the semi-final stage at Eurovision 2013, and unfortunately Ryan O’Shaughnessy will have his work cut out to break that losing streak. Together is a nice but rather forgettable break-up ballad. Hear it here.

Eurovision: the 10 songs that could win

Equinox - Bones
Equinox are a Bulgarian-American vocal group whose bizarre outfits look like they were swiped from the set of Battlefield Earth. Nevertheless, this gloomy electro-pop act are considered a decent outside bet to win. Hear it here.

Jessica Mauboy - We Got Love
This is Australia’s fourth appearance at Eurovision. After placing second in 2016, fans Down Under are confident Jessica Mauboy can go one better in Lisbon. She’s got a big voice and decent song to sing. But her performances at rehearsal have reportedly underwhelmed. Hear it here.

Waylon - Outlaw In ‘Em
Dutch country music performed by a krump-dancing cowboy in leopard skin pimp coat... What’s not to love? Well, besides everything I just said. Hear it here.

Mikolas Josef - Lie To Me
With a style so kitsch and retro he could have stepped out of an old episode of Saved By The Bell, Mikolas Josef is a cheesy Czech MC whose entry is all about telling lies. It’s a new genre I’m calling Bohemian Rap Deceit. (Okay, I’ll get my coat...) Hear it here.

Elina Nechayeva - La Forza
Finally, Elina Nechayeva is a classically trained soprano, whose spectacular voice, shape-shifting dress (as well as the costs incurred in transporting said frock to Lisbon) all proved major talking points in the run up to Saturday’s final. At the risk of damning the woman with faint praise, I would say her Italian-language song is the best thing in the show by a country mile. Expect to find Elina applauding graciously, then, as Israel clucks its way to victory on the night. Hear it here.