How do you write a Eurovision hit? 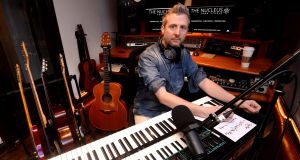 Hamlet Sweeney: “We just wanted to write a great song so that if it didn’t make Eurovision, at least we’d still have a great song. And we nailed it.” Photograph: Cyril Byrne

When we last met in January 2017, Hamlet Sweeney was sitting at the desk of a top-floor office on Dublin’s South William Street, laying out his plans, hopes and dreams for the future of the venture he had newly founded and ploughed his own money into. Today, his surroundings are slightly different. He’s in a hotel room in Lisbon ahead of the Eurovision Song Contest, where Ireland’s entry Together – a product of The Nucleus, Ireland’s first self-styled “hit factory” – will bid to restore our national pride in the competition.

The foundation of The Nucleus came after a period of personal tumult for the fortysomething Sweeney, who has extensive experience in the music industry – as a singer-songwriter, a studio engineer, a promoter and as the owner of an audio-visual company. He initially considered going to LA or London to implement his idea, but settled on Dublin as the hub.

“I’ve always been fascinated by the music industry, and I guess in a way that’s why I’ve tried so many different things. But it was actually a personal thing that led me to do The Nucleus. I was a single parent to my son from when he was 12, but he’s now 24 – and when he hit his early 20s, I realised ‘Oh, wow – they leave you. What do I do now?!’,” he laughs. “At the same time, my father passed away under very difficult circumstances, so I thought ‘Y’know what? Life is fragile’. These two things made me realise that now is the time to do what I really want in life.”

The last year has been a busy one for Sweeney and his team of songwriters, who have spent the past 16 months working behind the scenes to build their catalogue of songs. Numerous three-day ‘songwriting camps’ – where writers are paired together and given briefs to collaborate on writing what will hopefully become a major pop hit – took place, with the plan to sell on songs forged in The Nucleus to artists and record companies around the world, thanks to their various sub-publishers in territories including Europe, the United States, Asia and Australia. Their catalogue only went live five weeks ago and they have already enjoyed success, with a Nucleus song (The Little Things You Do) acting as Jake Carter’s post-Dancing with the Stars single, and another track of theirs featuring on the recent US iTunes Top 10 EP by Irish Glee star Damian McGinty.

“The long lead-in was deliberate; I didn’t want it to be a flash in the pan,” Sweeney says. “I said ‘We’re gonna be a chicken proudly sitting on the eggs, and we’re not going to get off the eggs until they’re ready’. I didn’t want to be flying to Stockholm and chatting to people and saying ‘Okay, here’s a great song’ and for them to say ‘Cool, what else have you got?’ and there’s nothing there. Our last songwriting camp was in January, and as of that time we had 168 songs – and since then, we’ve gone over the 200 mark.”

Eurovision: the 10 songs that could win

The bigger question is, how do you go about writing a Eurovision hit? It has arguably become increasingly difficult to pinpoint a winning formula in the contest in recent years, but Sweeney’s brief to his writers was simple.

“It was actually quite a tight brief,” he reveals. “I often think the best talent will sometimes react best when you give them parameters – so instead of saying ‘You guys are amazing – get in a room and give us a call when you’ve got a song’, sometimes you need to say ‘Right, here’s what we want – here’s the BPM, here’s the vibe of the song, here’s what it needs to be about, so there’s a framework there for them to pour their creativity into.

“Last year, we did two writing campaigns that had Eurovision at their heart - but I didn’t want ‘Eurovision’ songs, and I told the writers that. I said ‘Don’t think of Bucks Fizz and Making Your Mind Up. Don’t be trying to copy other Euro pop songs. We’re just gonna write a great pop song.’ There are top-class songwriters in Sweden and Europe and the US trying to get a song into Eurovision every year, but we don’t see that in Ireland – we just remember Dustin the Turkey, ” he chuckles. “I think by virtue of the fact that we haven’t won it in so long, we’re a bit like the little Jack Russell behind the gate, barking at the big dog – but only when they’ve turned away. ‘We don’t need you! We don’t want you! Go away!’. We just wanted to write a great song so that if it didn’t make Eurovision, at least we’d still have a great song. And we nailed it.”

Together was co-written by Mark Caplice and Laura Elizabeth Hughes along with Ryan O’Shaughnessy, who will be performing it on the Lisbon stage tonight. It was submitted to RTÉ via its ‘open submission’ process, although O’Shaughnessy was not attached to perform from the beginning. “I’d asked him at previous songwriting campaigns if we nailed a song, would he consider being the singer and he said ‘I’m not sure if it’s the right thing for my career right now’. RTÉ knew this and asked me to talk him into it – but in the end it was his mum and his girlfriend who did, even though I got the credit,” he laughs. “But it worked out and he is the right man to sing it.”

The best-case scenario for all involved would be for Together to triumph in glorious fashion and restore Ireland’s Eurovision dignity – but for Sweeney, The Nucleus has already won, in many respects. He is already planning a further two songwriting camps focused on Eurovision 2019 later this year involving international songwriters, with a view to potentially supplying not just Ireland but other countries with their entries.

“Getting the Eurovision song has been kind of amazing for us, regardless of what may or may not happen,” he says. “To be able to say ‘We’re brand new – but our song was selected to represent our country in Eurovision’ – that really counts for something. People whose doors we were chasing down, suddenly their doors are open, because there’s a lot of respect and prestige that goes with it. So to be selected is a major seal of approval.”

And whatever happens, he is confident the two most dreaded words in Eurovision will not be spoken in relation to the Irish entry. “Nil points won’t happen,” he says, chuckling. “I desperately hope we do well – we haven’t even qualified for the final in five years, and with The Nucleus being a new company and RTÉ getting behind us and showing us a lot of support, I’d love for the song to progress and for it to do well. I think we’ve got a dinger of a pop ballad, and it’s getting a great reaction. We’re hoping that that’s a good sign and that it’ll go through, but anything can happen in Eurovision. We’ve got a brilliant song and a brilliant performer, but ultimately, it’s out of our hands.”

Ryan O’Shaughnessy will perform Together in the first Eurovision semi-final in Lisbon, which is on RTÉ2 and BBC4 from 8pm