Host Lisbon is helping to keep politics out of the song contest, but the lyrics say it all 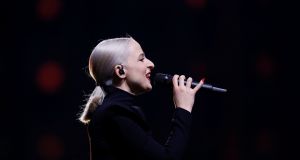 After a year when politics threatened to engulf the Eurovision Song Contest, the sabre-rattling is quieter in 2018, but European and global events are still finding their way into the annual songfest.

Last year’s contest, held in Kyiv, hit the headlines when Ukrainian authorities banned the Russian singer, Julia Samoylova, from entering the country because she had previously performed in the disputed region of Crimea.

Russia did not participate in Eurovision 2017, and Ukraine was later hit with a hefty fine by contest producers, the European Broadcasting Union (EBU), which claimed the ban threatened the contest’s “brand reputation”.

Portugal won the right to host this year’s contest – after 53 years of trying – when Salvador Sobral’s jazz ballad Amar Pelos Dois picked up the most votes in contest history in Kyiv.

The atmosphere around the contest this year in Lisbon feels different from the Ukrainian capital, says William Lee Adams, editor-in-chief of the independent Eurovision website Wiwibloggs.com.

Samoylova is finally having her moment in the Eurovision spotlight as this year’s Russian competitor. She says that her anthemic song I Won’t Break and its staging – which perches the wheelchair-using singer atop a glowing blue mountain – are about “unity with nature and with each other”.

While the host broadcaster RTP mentions in its promotional material that it is a crucial moment for Europe to “stand united for all of the huge challenges we face”, the contest’s theme of All Aboard is a reference to Portugal and Lisbon’s history of being connected to Europe and the rest of the world by the sea, according to an EBU representative.

And if some might read a message of European unity in the UK performer SuRie’s dance anthem Storm (“Storms don’t last forever . . . we can hold our hands together through this storm”) she does not bring up Brexit when being interviewed about the song.

Italy and France – which, along with the UK, Germany, Spain, and host country Portugal qualify automatically for the contest final – both make reference to current socio-political crises in their songs.

France’s song takes its inspiration and title from the story of a Nigerian refugee who gave birth while crossing the Mediterranean on a humanitarian ship and named her baby girl Mercy. Adams sees Mercy as “a story of hope in difficult circumstances” and “a reminder to Europeans of their humanity”.

The French song has mounted in popularity since Eurovision rehearsals began on April 30th. Bookies have tipped it to finish fourth overall, after Israel, Estonia and Norway.

Ireland’s Ryan O’Shaughnessy competes in Tuesday night’s semi-final with his ballad Together. With 18 other songs in the semi-final, he will have his work cut out to qualify for Saturday’s final.