Torquil Campbell, the frontman of Canadian indie posters Stars, on free speech, The Smiths and the impact of music 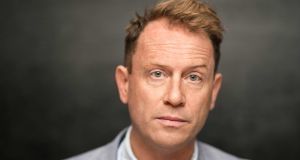 Torquil Campbell: 'We’re not nostalgic about our music'

The tiniest hint of apocalyptic dread has crept into Torquil Campbell’s voice. “We are raising a generation of Maoists,” says the Stars frontman. “Some of the younger artists I know, if you asked them should I be sent to a re-education camp – they would say, I should.”

Campbell has shared the stage with Philip Seymour Hoffman, cameoed in Sex and the City and, as leader of the wonderful Stars, fought the brave fight for wistful indie pop. And at 47 the actor-turned-singer is clearly a long way from going meekly into the night. One particular frustration is the age of puritanism and speech suppression into which, he argues, we have been ushered by technology. Truly he despairs for kids today.

“There was a T-shirt years ago that we put out that said ‘Stars is for Fags’,” he says. “All my life when people wanted to make me feel small, that’s what they called me. I don’t happen to be gay. But I wore it as a badge of honour. To me, what it meant was that I’m beautiful, I’m a person who is sensitive, stylish, fun, delicious. I turned that word around to make it something to celebrate.

“The other day we got a letter from a kid saying, ‘you have this T-shirt on your website for sale . . . how dare you . . . how could you do this to gay people? . . . you say you’re an ally.’ Well, you know what, I don’t have to prove my f**king credentials. Because I am an ally: of all people who are disenfranchised and mistreated. I have been a ‘fag’ all my life. I will continue to be one, whether you like that or not. You can’t f**king police my language.”

He falls silent but only for a moment. “I’m not your enemy, mate. And yet I’m a person who has to watch what they say. How do we have a vibrant, subversive, revolutionary culture when nobody is able to say what’s on their mind without risk of having their career ended?”

One of pop’s fundamental rules is that the quieter the music, the more ferocious the artist. Kurt Cobain spoke off stage in a grainy almost-whisper. Years ago my solitary attempt at interviewing carefree Evan Dando came unstuck when he had a row with the manager of the hotel at which he was staying and stormed out. Among the more disconcerting ways to pass 15 minutes is on the phone with patron saint of sensitive pop – Robyn. She is terrifying.

Campbell, as you may have gathered, is another living embodiment of this counter intuition. Stars are, in the best possible sense, wide-eyed indie abandonment on a stick. Think Belle and Sebastian, minus the football hooligan swagger. The Magnetic Fields with all that aggressive testosterone expunged. If there’s a student disco in heaven, the Canadians are on permanent rotation there.

So it follows that Campbell, in person, is the very opposite of the sensitive and elegiac group he co-fronts with singer Amy Millan. He’s softly spoken but not at all one to tiptoe gently. The first time many of us became aware of him was in 2000 when he started a one-way feud with Stephin Merritt of the Magnetic Fields. It was the indie equivalent of the East Coast-West Coast rap wars, Uzis and cocaine replaced by ukuleles and Earl Grey tea.

He starred in his first Hollywood movie at age 10, using the proceeds to help pay off the family mortgage

This, we quickly learned, was no one-off. At a sold-out early concert in Ireland he interrupted the adoring hush by yelling something jarring about the Catholic Church and child abuse. I’ve never seen so many whooping hipsters turn slack-jawed simultaneously. It was a sort of performance art. More than a decade on, Campbell remains a singular presence.

He recalls a recent conversation with Kevin Drew of Broken Social Scene. “He said, ‘they don’t need us any more Torqy, they’re their own rock stars now’. People don’t need David Bowie to dress up as Ziggy Stardust. They’ve got Instagram. On one level you think that is exciting. The problem is that we’ve let the internet be run by companies – ad companies. And instead of it being an inspiring space where there are a million Ziggy Stardust, there’s just a million f**king ads, a million people with croissants and lattes. The banal bourgeois s**t about ourselves that we used to hide is now celebrated and fetishised and looked on as if it’s the same as a creative idea.”

Campbell abides by the tenet that it’s better to burn out than fade away. And yet Stars have proved themselves in it for the long haul. This year marks the 15th anniversary of perhaps their most beloved album, Set Yourself On Fire. Steeped in horns, pianos and melancholia, the record represented a moment of critical mass for the quintet, with the single Your Ex Lover Is Dead becoming a medium-scale hit (as was obligatory it featured on The OC).

Set Yourself On Fire also helped crystallise the sense of Canada as the geopolitical equivalent of the neighbourhood’s coolest record shop. Twelve months later Arcade Fire rocked Electric Picnic (or Electric Picnic rocked Arcade Fire, depending on who you ask). Broken Social Scene were filling Vicar Street. Canadians no longer had to cringe even slightly for having inflicted Nickelback on the world. What a remarkable era it was.

There is now an opportunity to relive that time all over again (minus Nickelback). Stars are touring Set Yourself On Fire and will perform the entire album at the Workman’s Club in Dublin on Friday, September 27th. Such is the demand they are playing two shows, with tickets available at time of writing for the 11pm date.

“We’re not nostalgic about our music,” says Campbell. “Other people are. That’s the thing about pop. Once you make it, it’s not really yours. It belongs to the people, who use it for their day-to-day, getting-through-life stuff. Anybody who is a fan of pop knows that it’s one of the greatest keepers of memories. Our music isn’t complete until the listener has taken it and done the dishes to it or had sex to it or driven to their mum’s funeral or whatever it is they had to do and listened to us along the way.”

Campbell wouldn’t wish to be described as an indie elder-statesmen. But he has devoted his life to singing about love, death and everything in between from the perspective of the eternal outsider. He did so when other more lucrative options were available. Born in Sheffield and raised in Toronto his earliest calling was the screen. He starred in his first Hollywood movie at age 10, using the proceeds to help pay off the family mortgage.

Broadway beckoned as a young man, where he was a contemporary Philip Seymour Hoffman. He had the tiniest cameo in Sex and the City and has been answering questions about it ever since. There were parts in Law & Order and voiceover work on Rupert the Bear (he was Bill Badger). As an actor he’s seen it and done it.

Still it was music which obsessed Campbell. He carried a little English raincloud with him when he moved to Canada and grew up feeling detached from his more naturally optimistic North American peers. His early heroes were obviously The Smiths, patron saints of glum adolescents from Saskatchewan to Salford. He continues to listen to their records, though with understandable ambivalence given Morrissey’s alleged right-wing views.

“He strikes me as a very sad person now – but not in the way of being sad with us. He’s sad alone. He’s sitting in some house in Los Angeles, watching Fox News, thinking he’s being clever because he disagrees with Billy Bragg. It’s not clever, man.”