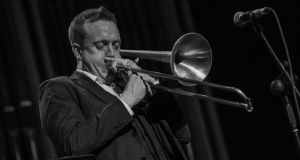 Paul Dunlea’s 4 Corners Project
Arthurs, Dublin, arthurspub.ie (also Monday 27, Maggie’s Farm, Co Down; Tuesday 28th, Crane Lane, Cork)
In the last year, Cork trombonist Paul Dunlea has toured with Michael Bublé, curated a jazz series at the Cork Opera House and musically directed the popular Tuesday night sessions at Crane Lane, but even by the trombonist’s breathless standards, this latest project is a major undertaking. 4 Corners is a suite of original compositions referencing the War of Independence, using musicians drawn from across Britain and Ireland, including London-based bassist Michael Janisch, Scottish pianist Steve Hamilton, Birmingham-based drummer Andrew Bain, and Dunlea himself from the people’s republic of Munster. The heavyweight quartet arrives on these shores following dates in London, Glasgow, Edinburgh and Brighton, so expect a well-honed group sound from four experienced improvisers.

Dublin Jazz Co-Op: Izumi Kimura & Cora Venus Lunny
Workman’s Club, Dublin, facebook.com/dublinjazzcoop
The more abstract end of the improv spectrum has always struggled for purchase in Irish ears, and musicians with the necessary combination of technical skill and melodic intrepidity are rare, so this chance to hear pianist Izumi Kimura and violinist Cora Venus Lunny reprise their duo collaboration in the intimate upstairs Vintage Room at the Workman’s Club should not be missed by the open of mind and ear. The talented pair have been working together on and off since 2017, and most recently collaborated as part of Kimura’s well-received composer-in-residence series at the DLR Lexicon in Dún Laoghaire. With an album now scheduled for the summer, what began as a spontaneous encounter is maturing into an important contribution to the cause of Irish musical freedom.

Dirty Jazz Club
Arthurs, Dublin, arthurspub.ie
The Dirty Jazz Club session at Arthurs on the first Saturday of every month is one of the city’s most popular jazz residencies, and there’s a good reason for that. The talented group – drummer Conor Murray, keyboardist Darragh O’Kelly, bassist Derek Whyte, trumpeter Bill Blackmore, trombonist Colm O’Hara, saxophonist Cathal Roche – have been playing together for years, so there is a level of understanding and empathy in the group that means they can take well-loved tunes by Miles Davis, Joe Zawinul and others and make them their own. It’s the sort of long-running residency that people will nod sagely about in years to come and say they were there, even if they weren’t. Claim the high ground in that future conversation by, y’know, actually going.

Dublin Jazz Co-Op: Re:Ellington
Workman’s Club, Dublin, facebook.com/dublinjazzcoop
Since his death in 1974, successive generations of jazz musicians have been excavating the music of the great Duke Ellington and proving there is still plenty of road left in the Ellington journey. Re:Ellington is a collaborative project featuring six of the Irish scene’s most accomplished improvisers – clarinettist Matt Berrill, saxophonist Nick Roth, trombonist Paul Dunlea, pianist Greg Felton, bassist Derek Whyte and drummer Matthew Jacobson – who have each re-arranged or entirely re-imagined an Ellington composition for the group. Interwoven with fragments of interviews with the great composer, the set includes lesser played Ellingtonia such as Afrique and African Flower, as well as favourites like I’m Beginning to See the Light and Caravan. Bands with three horns, particularly of this quality, are rare on Dublin stages, and there will be plenty here to delight both Ellington fans and those with more contemporary tastes.

Zandra, Queen of Jazz
Smock Alley Theatre, Dublin, smockalley.com (also Monday 3rd)
Zandra Mitchell, born in Phibsborough in 1903, was Ireland’s first international jazz star, touring Europe in the 1920s, appearing on the same stage as Coleman Hawkins and Django Reinhardt, and even leading her own band, Baby Mitchell and her Original Queens of Jazz, in Berlin during the 1930s. Roseanne Lynch’s musical theatre work, reclaiming this largely forgotten star of Irish jazz, sold out its seven show run at Smock Alley last November, so here’s another chance – two in fact – to catch Zandra, Queen of Jazz, directed by Katherine Soloviev with music by Richard Lennon.