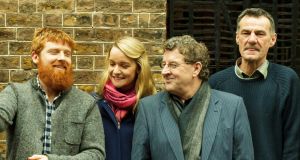 They were a band who defied convention and classification. Their sound was rooted in folk but with an undeniable contemporary feel. Stockton’s Wing, a raggle-taggle bunch of friends from Ennis took their name from a lyric on Backstreets, a song on Bruce Springsteen’s 1975 album, Born To Run: “Slow dancing in the dark on the beach at Stockton’s Wing.” In 1977, they were a band that meant business. Now, more than four decades later, the band are still mining new material, having disbanded, reformed and adopted an open-door policy to its membership roster. These days, singer, songwriter and guitarist, Mike Hanrahan is back at the helm, having taken his leave for more than a decade to train in Ballymaloe and ply his trade as a cook (never a chef, he insists). He’s got a fire in his belly and a renewed taste for the road. Making music, he says, never felt better.

“I gave it up for 10 years,” Hanrahan recounts, a risk taker in life and in music. “I went off cooking, and I played purely for pleasure, so when I came back, it was with a completely new attitude. These days I live for every moment on stage. I love it. Whereas when I left the music years ago I felt like: get me out of here.”

It’s 40 years since Stockton’s Wing released Beautiful Affair, a song Mike wrote at the age of 20. In 1980, it was the song that propelled them onto stages from Dingle to Letterkenny, every mile on a late-night tour bus helping to hone that propulsive sound that marked them apart as one of the most exciting live band of their generation.

“We were like a band of brothers and we looked after each other,” Hanrahan says, smiling. “It was us against the world. We were a country band who came up to live in Dublin, and it was the energy and support that we gave to one another that kept us going. It was all about the music because we knew that this style of music we were creating was something different. We were all free and open to each other’s ideas. There was nobody dictating the pace of the music, or dictating to us as a unit. All we wanted was to write and be free. It was great.”

The band owes much to PJ Curtis, the producer who played a key role in capturing the band’s sound in the studio. Their third album, Light in the Western Sky, featured two highly successful singles, Walk Away and Beautiful Affair. Mike still marvels at Curtis’s formative influence on the band.

“PJ produced some of the greatest Irish albums,” he says, “and the story of PJ’s influence on Irish music has yet to be written. He was listening to these mad albums, like The Abyssinian Church Choir, and so much great American music. He gave Maura O’Connell and myself Emmylou Harris’s first album, and Gram Parsons’s albums. He’d just come off the road from working with The Bothy Band, yet he was steeped in rock’n’roll too. He really was instrumental in helping us to create a sound and that’s very evident in our first album, Take a Chance, which he produced. He had a vision but he always allowed us to be ourselves.”

Hanrahan had been in a duo with O’Connell before he joined Stockton’s Wing, and she went on to join De Danann. Those were heady days.

“We were bould,” Hanrahan says, smiling, “and we had that devil-may-care attitude to our music.

“We were totally wedded to the music and to the freedom that came with it. We were bohemian in the musical sense, in that we didn’t feel tied to the norm. We just decided to plough our own furrow. We let the music and the gigs dictate where we would go, because live performance was what we loved most. We just loved that connection with the audience.”

And live performance was where the band shone brightest. This was a band that chose Stravinsky’s The Fireworks Suite to herald their arrival on stage. No hiding their fires under a bushel.

“It was just great fun,” says Hanrahan. “I’ll always remember a record company in London who wanted to sign us and he said to us: ‘it’s all about bums on seats lads’. That phrase shook us and we thought: no actually it’s not about bums on seats. It’s much deeper than that. It’s actually about the people who come to the gig. It’s about the music and the audience. So we turned him down. We knew we were a good band and we looked after our audience.”

We’ve taken on a whole new role this year

Anyone who saw the band perform in their heyday can testify to the visceral energy they generated on stage: it would have powered a small town, had they plugged themselves into the national grid. This was an outfit whose distinctive staccato sound was influenced by everything from The Kilfenora Céilí Band to American jazz bassist Jaco Pastorius (who played with Weather Report, Pat Metheny and Joni Mitchell), thanks to the eclectic listening tastes of the band’s percussionist, Tommy Hayes. It was that left-of-centre focus combined with an exceptional grounding in traditional music from founding members, Hanrahan on banjo, his cousin Paul Roche on flute and Maurice Lennon on fiddle that forged such an irresistible and distinctive sound.

Steve Cooney was another musician who had a significant influence, and he joined them in 2018 when they marked their 40th anniversary. The latest incarnation of Stockton’s Wing, anchored by Hanrahan and Roche, with fiddle player Tara Breen, and Karol Lynch on banjo and mandolin, are in rehearsals for a gala performance at his year’s Temple Bar Tradfest in Dublin Castle.

“We’ve taken on a whole new role this year,” Hanrahan enthuses, “with our Tradfest gig. We’ve got Ralph McTell, Gavin Glass, The Henry Girls, Leslie Dowdall, Phelim Drew and others joining us. It’s just great to think that a new generation can hear Stockton’s Wing’s music.”

With a compilation album released this month by Universal Records, titled Beautiful Affair: A Stockton’s Wing Retrospective, the band are back – and Hanrahan is relishing this second wind he’s feeling.

“We were invited to do a session at Tradfest six or seven years ago, and it brought us back together as a band. It gave us a profile again. I really think that Tradfest deserve great kudos for nurturing new talent, and at the same time, looking out for oul’ fellas like myself.”

Gillette ad: Why it's good for men and women that we're having this conversation
5

Poem of the week: Aubade, by Amanda Bell
7