U2's new album Songs of Experience: the most tortuous journey 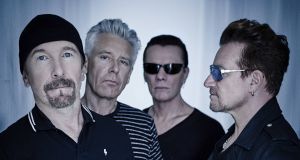 Sitting in a windowless room in Apple’s Cupertino HQ in California in September 2014, Bono has just pressed the switch that has made U2’s Songs of Innocence album available to over 500 million iTunes customers. The relief at finally getting the album out is evident from his worried remark that the gap between the previous No Line On The Horizon album and Songs of Innocence (five and a half years) has been the longest ever gap between U2 albums.

“I probably shouldn’t be telling you this but the reason the delay was so long is because we haven’t just been working on Songs of Innocence, we have in fact been working on two albums at the same time. There’s a ‘sister’ album called Songs of Experience also.”

The plan then was to do a “Zooropa” on Songs of Experience. Just as the band had recorded and released the Zooropa album while they toured Achtung Baby in the early 1990s, the idea was to finish SOE off while touring Songs of Innocence during 2015.

Forward to September 2015 and U2 are in the final stretch of shows of the Songs of Innocence tour and U2 are as good as their word. After a show in Turin, Bono plays me what sounds like a finished and ready-to-go version of Songs of Experience.

As the songs pump out over Bono’s mobile phone via the car stereo system, he enters into a reverie: “Just listen to Edge’s guitar work on this track”; “Larry’s drum break on this is amazing”; “This track has a really crunchy beat”; “This is among the best work we’ve ever done.”

Okey-dokey Bono, but when is it coming out? “If I had my way, we’d release this album tomorrow,” he said. “But we have some more Songs of Innocence dates to do so we’ll release it in early 2016. This is a highly unusual situation for U2 to be in – in that we have a lot of the songs already completed ahead of the release date.”

“Brexit and Trump was what went wrong” says Bono now. Having missed their early 2016 release slot (standard practice for a band who are notoriously reluctant to hand over master tapes), they wrote a few new songs, reworked others, tried out different producers and by the time they looked up from their mixing desk, Britain had voted to leave the EU and Donald Trump was about to be elected US president.

“In 2016 the world changed beyond all recognition and we just weren’t sure that the album we had finished was what we wanted to put out in that climate,” Bono told me in Seattle earlier this year. “The album was ready to go but we found that the songs that were on it just didn’t reflect the major changes that were happening – both on a political and on a personal level.”

While U2 have never got their songs from the news headlines, the fear was that songs written in 2015 and the first half of 2016 now seemed hopelessly out of step with the new political dispensation.

“U2 songs have always come out as stories,” says Bono, “they include breaking news as well what’s going on in our own lives and what’s going on in the more general community. When the world changes, you change with it. We didn’t want to release an album where it seemed we were singing about the equivalent of the Y2K bug.”

On the night of November 8th, 2016, a simple twist of political fate left the band with the realisation that while songs from just a few months previous had dated and become irrelevant, songs of theirs from over 30 years ago suddenly acquired a new relevance.

As they waited for the political fallout of Brexit and Trump to play itself out, they put the Songs of Experience album into a drawer and reworked the Joshua Tree songs of the Reagan/Thatcher era for the Trump/Theresa May era.

“I never sit down and listen to old U2 albums but when I sat down and listened again to the Joshua Tree album in 2016, I found that these songs that we had written in the mid 1980s about Ronald Reagan and Margaret Thatcher made perfect sense for 2017,” he says. “We were singing back then about how ‘we need new dreams tonight’, and in 2017 we most definitely need new dreams again – and I think that’s the way everyone feels about what’s happening in the world right now.”

This year’s six month tour of the Joshua Tree album helped the band go back to their future. They had the time and space to re-calibrate the Songs of Experience material: you can hear the changes on new songs such as The Blackout with lyrics that speak of “Democracy is flat on its back” and references to a political “Bigmouth” over a rhythm section reminiscent of The Clash’s Working For The Clampdown.

If politically, Songs of Experience was given a last-minute re-upholstering, the personal changes needed to be addressed too. Sometime between Christmas and New Year last year, Bono had a near-death experience. He won’t go into the precise details of what happened (apparently not now or not ever) but The Edge has confirmed that “Bono had a brush with mortality – he definitely had a serious moment”.

He reworked the album’s lyrics after this episode. “The songs on this album can best be understood as me thinking what do I want to say to the people that I most love – on this album are letters written by me to my family, my friends, the people who come to U2 shows” he says.

Whatever happened shook the singer up so much that he decided to write a series of letters to the people closest to him. These form the majority of the lyrics of Songs of Experience.

“The songs on this album can best be understood as me thinking what do I want to say to the people that I most love. In there are letters written by me to my family, my friends, the people who come to U2 shows” he says. “You’re The Best Thing About Me is about my wife Ali, a song called The Showman is a love letter I wrote to our fans and American Soul is a love letter to America.”

Between conception and release, Songs of Experience has had the most tortuous journey of all of U2’s 14 studio albums.

U2 had their 40th anniversary last year - they pointedly ignored the landmark date, refusing to celebrate the event or acknowledge their remarkable achievements over the past four decades at the very top of the music industry pile.

But when they formed in a kitchen in Artane in 1976, how were they to know that their 41st year of existence would be among their most dramatic and that Songs of Experience would be their memento mori.