Trad group Dervish’s 30th anniversary to be marked by council 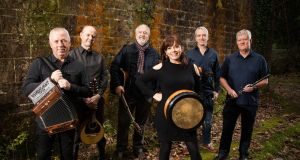 Dervish are to be given a special reception by Sligo County Council to mark the band’s 30 years of performing. Photograph: Colin Gillen/framelight.ie

Sligo-based traditional music group Dervish are to be given a special reception by Sligo County Council to mark 30 years of the band performing.

The reception will be hosted by chairman of the council Martin Barker on Thursday, May 30th, at the county hall.

The group began playing together at a trad session 30 years ago in one of Sligo’s oldest pubs, Shoot The Crows.

In 2004 Dervish were given the freedom of Sligo city in a civic reception, an accolade they share with WB Yeats and Countess Markievicz.