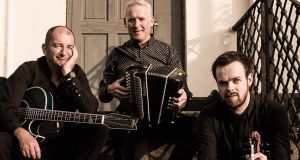 Veteran west Cork singer Seán Ó Sé pays a visit to Belturbet for this year’s Belturbet Fleadh, where he’ll preside over an evening of songs and stories, anchored by the song inextricably linked with him, An Poc ar Buile. Musicians drawn from Cavan’s rich traditional music scene, along with some visiting for the weekend fleadh, will join Ó Sé for an evening of musical frolics, including lilter Seamus Fay, concertina player Zoran Donohoe and storyteller Eamon Maguire, among others.

Session with the Pipers
The Cobblestone, Dublin 9pm €13/€9 pipers.ie

A welcome opportunity to catch this trio comprising accordion player Dónal Murphy, fiddle player Niall Murphy and guitarist Mike Galvin, whose 2015 debut album embraced the sublime Jay Ungar tune Ashokan Farewell, alongside some stalwarts of the Sliabh Luachra tradition. Dónal is a veteran of Sliabh Notes and of Four Men and a Dog, so he is no stranger to the fine art of whooping it up and dialling it down according to the demands of each tune.

This weekly gathering of singers and listeners has become a Dublin institution. Tonight is club night, so all singers are welcome with songs in any language. Club regulars will hold the fort, including Jerry O’Reilly, Mick Keeley, Máire Ní Chróinín, Eilish Kennedy, Fergus Russell, Frank Nugent and Antaine Ó Faracháin. A boon for song collectors and song lovers alike.

Rise of the killer robots: The future of war
8