O’Shea Jackson jnr: ‘I want to take the family name to new heights’

The ‘Godzilla’ star on Hollywood typecasting, being a geek, and his famous dad 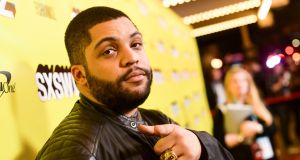 That seems to have worked out for the best. Today, we are in London for the premiere of Godzilla: King of the Monsters, a film that stars O’Shea Jackson jnr alongside Vera Farmiga, Charles Dance, Kyle Chandler, Ken Watanabe, Anthony Ramos, Zhang Ziyi, David Strathairn, and Millie Bobby Brown. The autograph hunters queuing up outside Jackson’s hotel are split between him and the Stranger Things star.

Making a Godzilla movie was, says Jackson jnr, a dream come true for a self-confessed geek who grew up watching anime and reading comic books.

“I love Godzilla,” says Jackson jnr. “When I was a kid I loved the Hanna-Barbera cartoon on the Syfy channel and then I loved the spin-off cartoon from the Matthew Broderick film. So I’ve always been a big Godzilla supporter. And I’m a big Mothra supporter. Mothra is the queen. The only monster I’ve seen beat Godzilla in a one-on-one.”

Should these words make no sense, here’s an (attempted) brief franchise recap. Since the gargantuan cryptozoological beast emerged from the sea to decimate Tokyo in Ishiro Honda’s nightmarish post-atomic 1954 film, there have been more than 30 movies featuring Godzilla, including a series of wildly imaginative, cash-in live-action flicks produced by Toho Studios: see Ghidorah, The Three-Headed Monster and Mothra vs Godzilla, both made in 1964, and many, many others. American translations have repeatedly failed to catch the public’s imagination in quite the same way.

Roland Emmerich’s mega-budgeted 1998 film was a critical and commercial flop. Gareth Edwards’s 2014 version fared better but failed to score the kind of notices that Hideaki Anno and Shinji Higuchi’s tense Japanese reboot Shin Godzilla did in 2017.

Following on from Kong: Skull Island, Godzilla: King of the Monsters is the third film in WB’s MonsterVerse and sets the stage for Godzilla vs Kong, which is scheduled to be released on March 13th, 2020. Although largely set in Boston and the Antarctic, Godzilla: King of the Monsters, which sees the monster-minding Monarch agency attempting to get to various creatures before ecoterrorists wake them from their slumbers, was largely shot in Atlanta, Georgia.

“A lot of the film comes down to the dope artists that they have,” says Jackson jnr, who is chief warrant officer in the film’s primary G-Team.

“Thank God I didn’t really have to go in the snow, but sometimes I wished I was. That’s the give and take of it, because you’re filming in Atlanta, Georgia, in the summer . . . in full Arctic military gear, it’s hot. And then there were practical effects. The snow you see [is] Epsom salt and soap. It’s really not great for the eyes. But you know, you’re doing a monster movie. And to be a Godzilla fan, then that’s something that will never be taken away from me. When you go and look up the Godzilla list of movies, my name will be in there somewhere.”

Jackson jnr, the first of four children born to O’Shea Jackson snr and Kimberly Woodruff, was born in 1991, the year his dad made a splash with John Singleton’s acclaimed drama Boyz N The Hood. Ice Cube, who was already established in music as a member of NWA and, from 1988, as a solo artist, was encouraged by the late John Singleton to try screenwriting. “If you can write a record,” reasoned the Boyz N The Hood director. “You can write a movie.”

Accordingly, Jackson jnr grew up around movie sets, including Friday (1995), which was written and produced by his father, and that film’s two sequels: Next Friday (2000) and Friday After Next (2002), as well as his father’s directorial debut, The Players Club (1998).

“When I was a teenager that was when my father was making the Are We There Yet? films,” says Jackson jnr. “So I remember those and I remember the set on Next Friday. I always love getting up really early in the morning and going into a trailer when it’s cold outside. I loved eating the breakfast burritos and taking golf carts to go around the set so I could ask people about what they were doing. I still love being on a set. I arrive really early, an hour before my call time, so I can feel the energy.”

Jackson jnr recalls how at the age of nine he had his eyes occasionally shielded while his dad undertook the Up In Smoke tour, alongside Dr Dre, Snoop Dogg, Eminem, and a dozen or so rap greats. Back in California, he grew up quietly in San Fernando Valley and attended William Howard Taft High School, the same school his family was bussed 40 miles a day to attend. At school, Jackson jnr became aware of his father’s celebrity.

“I knew that nobody else’s dad was [in the public eye],” he recalls. “So when I was at school, even as a little kid, you come to realise quickly that there are people who are talking to you who weren’t interested in talking to you until after they found out who your dad is. So I had to develop a bulls**t metre earlier than I should have had to. It wasn’t so bad. But that part was a gift and a curse.”

Years later, while on tour in Australia, Jackson jnr realised there was another dimension to his father’s fame: “I knew that he was famous but I didn’t realise how important he was until I met this dude who told me that he used to be heavily into drugs, that he was a gangbanger, and that listening [to] my father’s music helped him get on the right path. And he became a doctor. And that’s when you realise that the stuff that your dad was writing in the kitchen at home had meaning for people. That’s what fired me to audition for Straight Outta Compton. Because I realised the effect my dad had on people.”

He laughs: “And it was a role I had been researching for a long time.”

In common with his father, Jackson jnr has dabbled in the music industry, performing under the name OMG. In 2010, he and his brother Darrell featured on the songs She Couldn’t Make It on Her Own and Y’all Know How I Am, on Ice Cube’s I Am the West album. Jackson jnr has taken a step back from the music industry since the release of his last single, Ain’t No Place, in 2015.

“I had to break as far as rapping is concerned,” he says. “Because I feel that Hollywood typecasts rappers. That’s just how it is. They see you in one way and it’s very, very hard to get them to see you any other way. Or even to let you try. My father’s name in music is untouchable but there were some roles that he deserved a shot at. And that didn’t happen. So I feel like I want to make sure that I get a shot, so I can take the family name to new heights.”

Thus far, the hiatus from the mic seems to be working. Having graduated from the University of Southern California, where he majored in screenwriting, Jackson jnr was the best thing about both Gerard Butler actioner Den of Thieves and the Seth Rogen and Charlize Theron-staffed romcom Long Shot. He attracted rave notices for his turns in Straight Outta Compton and the internet stalker comedy Ingrid Goes West, in which he plays a Batman-obsessed geek, a role, he says, that was less of a stretch than playing Ice Cube.

“That’s what I like to do,” he says. “I like to watch anime and play video games. It’s always important to separate yourself from the business. You have to keep the two separate. I never lose sight of that. I know that O’Shea Jackson jnr is a certain way of talking, a certain way I have to carry myself when I’m working on a film, when I’m out there selling a movie look. And behind closed doors watching wrestling. You keep those things separate and that keeps you level-headed. Being famous is all that noise, And that’s cool. But if you start believing all that, you just gonna’ wreck yourself.”

Godzilla: King of the Monsters is on release

The Movie Quiz: What is the last line in Chinatown?
7