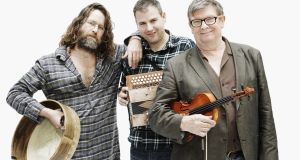 The first time Kevin Burke and Liam Ó Maonlaí encountered one another was two years ago on the University of Washington campus in Seattle, where Ó Maonlaí was reviewing the Joe Heaney collection and Burke was delivering a lecture.

They will renew their acquaintance this month, when they join forces with English guitarist and accordionist Tim Edey for a 12-date Music Network tour of the country.

“Kevin has a certain way of playing, a way of bending the note, a certain musicality in the way he approaches a tune that I just love,” Ó Maonlaí says. There’s a certain magic about it and it’s not about acrobatics: it’s more about the tune, the style and his feeling for the tune.”

Burke was born and raised in London but was fed a steady diet of Sligo music by his parents, while earning his classical fiddle stripes in class. A founding member of The Bothy Band, he drew many a fan to that outfit through his liquid, freewheeling fiddle style. He is working on an album with Californian guitarist John Brennan, which will include a Jimi Hendrix instrumental, a Lonnie Johnson 1930s track, an Allman Brothers piece and some Bach minuets.

It’s a recording that will fit in to what Burke impishly refers to as the “electric guitar-fiddle duet category”.

Later this year, he’ll be recording a new album with his long-time compadres the Celtic Fiddle Festival, touring the US with Dervish, and lecturing at the Texas Technical University in Buddy Holly’s home town of Lubbock. Before that, however, he is happy to wend his way across the country in the company of two musicians he admires.

“Our common denominator is traditional Irish music,” Burke says. “We all look outside the general repertoire that you’d expect from traditional musicians, so when we got together [for rehearsals], a few things came up naturally from our back catalogues. And one thing that’s very clear is that Tim is an incredible accompanist.”

On Burke’s website, he has a quote from conductor Thomas Beecham that he finds amusing: “The function of music is to release us from the tyranny of conscious thought.”

Beneath the playful exterior, Burke is a reflective musician who sees the source of the music as the beginning, middle and end of what he does. He refers readily to the late Catalan cellist Pablo Casals and French jazz violinist Stéphane Grappelli as musicians who got the essence of what a life of music is about.

“I read how Pablo Casals, at 90 years of age, was asked why he continued to practise. His reply was, ‘Because I think I’m making progress’. I think that’s great. And then there’s Grappelli. When he was in his 80s, a few years before he died, he was asked what he was working at. I think the interviewer thought he might have been working on a new album. His response was that he was working on his tone. A musician of that calibre, at that point in his life: a household name. I think it would shock a lot of young musicians to think that he was working on something so basic as his tone. And yet, that’s the whole thing right there: that’s where it starts. If you do the simple things well, you’re in good shape, but there’s always that nagging feeling that ‘I could do it better, I bet’.”

Liam Ó Maonlaí is no stranger to the road but still relishes the prospect of touring.

“Every town has its own story, its own character, its own genius, and that is revealed, whether in a storyteller or a fiddle player. I feel that when I travel around the country and play. And more often than not, there’s a tune to be had afterwards, which can really seal the deal.”

Burke too manages to strike a healthy balance between clocking up the road miles and playing the tunes. “The travelling seems to get harder and harder, but the music makes it worthwhile. Touring’s definitely not an easy way of life, and living out of a suitcase isn’t a lot of fun, but I think most touring musicians will tell you that we do have a lot of fun, because it’s all based around playing music.”

Ó Maonlaí knits this collaboration into the many other projects he has been working on from the Hothouse Flowers to Rian to his recent work with Ré. “I think I have a deep notion of who I am, but it’s not linear,” he says, reflecting on this multiplicity of influences.

“I remember Séamus Begley saying ‘We sang any song’. It’s not like we were confined to one particular type of song, but it’s the bones of a person, and how he has a sense of his own ancestry, his own country, is probably what gives something its identity. I feel that.

“Painting has always been a part of my creative output too. It hasn’t been my central career path, but I very much appreciate the visual and the abstract. There are rooms inside of me that need to be filled, or need to be emptied, whichever way you look at it. I think the truth is that I’m programmed to keep on keeping on. The rest of it looks after itself.”

Television: There’s not much tension in watching this detective