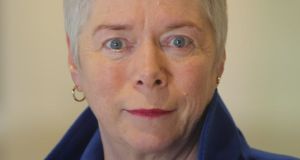 Mary McPartlan: the singer and broadcaster ‘leaves a legacy of achievement for the arts that will endure’, according to President Michael D Higgins

President Michael D Higgins has led tributes to the Leitrim singer and broadcaster Mary McPartlan, who has died from cancer at the age of 65.

“It is with deep sadness that Sabina and I have heard of the death of a dear friend, Mary McPartlan, musical director, broadcaster, and one of Ireland’s great folk singers,” he said in a statement today. She “leaves a legacy of achievement for the arts that will endure”.

McPartlan was creative director of NUI Galway’s Arts in Action programme and a Fulbright scholar whose research on the music of the Appalachian singer Jean Ritchie led to the establishment of an annual MA scholarship at NUIG for students from Berea College in Kentucky.

McPartlan always valued the richness of her life growing up outside Drumkeerin, where her mother, from Co Tyrone, shared a vast store of songs with her. Her early years of work with the department of posts and telegraphs forged a strong allegiance to union activism, and her creative work was shot through with a deep sense of belonging, of the economics of survival and of the indomitable power of a song. “A singer will always be song searching and song catching,” she said in a 2016 interview with this newspaper, to mark the release of her third and finest album, From Mountain to Mountain.

McPartlan was a member of the folk duo Calypso in the 1970s, but she channelled her creative talents into an eclectic range of projects, as a producer for television and stage. It was she who conceived what are now the Gradam Ceoil TG4 awards. She produced two seasons of the TG4 series Flosc, as well as an Irish traditional music show in Las Vegas in 2003. McPartlan’s love of the singer Margaret Barry’s music led to her producing the play She Moved Through the Fair: The Legend of Margaret Barry, collaborating with the writer Colin Irwin.

McPartlan is survived by her husband, Paddy Noonan, her two daughters, Mairéad and Méabh, her stepdaughter, Niamh, and her stepson, David.