Plus: Mario Bakuna & Edmundo Carneiro, Francesco Turrisi and Totally Made Up Orchestra 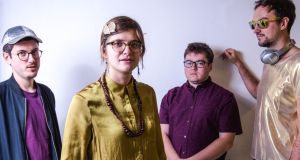 UK quartet Dinosaur are one of the headliners of the Brilliant Corners festival in Belfast, which runs from February 27th to March 7th. Photograph: Dave Stapleton

Mario Bakuna & Edmundo Carneiro
Arthur’s, Dublin (also Sunday 23rd)
arthurspub.ie
São Paulo guitarist and composer Mario Barkuna relocated to London a few years ago and has been drawing praise with his authentic interpretations of the classic Brazilian repertoire. “Where Rio de Janeiro meets Bahia”, is his duo recording with Paris-based Brazilian percussionist Edmundo Carneiro, whose credits include Brazilian legend Baden Powell and Cuban maestro Chucho Valdés. The collaboration explores the intersection between the urban sophistication of Rio’s bossa nova, epitomized by Tom Jobim, and the earthier, African-influenced sounds of Bahia, birthplace of some of Brazil’s most celebrated musicians including Dori Caymmi, João Gilberto and Caetano Veloso.

Dublin Jazz Co-Op: Katerina García & Band
Workman’s Club, Dublin
facebook.com/dublinjazzcoop
Vocalist Katerina García is a child of the European melting pot – born in Prague, raised in Barcelona, and now based in Dublin, where she lectures in Hispanic Studies at Trinity – and her repertoire is drawn from the folk music she has encountered on her journey across the continent, including Balkan, Sephardic and Irish traditional music. Joining her for the latest genre-defying instalment of the Dublin Jazz Co-Op series, curated by US-born composer Ethan Edwards, are Dublin-based Czech jazz guitarist Peter Moc and the well-regarded Irish traditional flautist Robert Harvey.

Halferty Boisseau Lavergne
Alliance Francaise, Dublin (also Thursday 27th, Billy Byrnes, Kilkenny; Friday 28th, National Yacht Club, Dublin; Saturday 29th, Arthurs, Dublin)
tommyhalferty.com
Guitarist Tommy Halferty’s association with France goes back several decades, and the Derry man has led numerous successful tours there featuring the cream of the French jazz scene. He brings two of France’s finest to Ireland this week for a short tour: respected Nantes bassist Sebastien Boisseau, who has worked with many of the heavyweights of the French scene, including Daniel Humair and Louis Sclavis, as well as illustrious visitors like Pat Metheny and Kenny Werner; and free-spirited drummer Christophe Lavergne, a long-standing member of Halferty’s French trios, who has also performed with pianist Benoît Delbecq and trumpeter Stéphane Belmondo. The set will feature some recent originals by the leader as well as music from some of Halferty’s principle influences, John McLaughlin, John Abercrombie, Dave Holland and Wayne Shorter. It’s a rare chance on his home turf to sample the Gallic side of one of Ireland’s best loved and most influential jazz musicians.

Brilliant Corners
Black Box and various venues, Belfast. Continues until March 7th
brilliantcornersbelfast.com
With the demise of the Galway Jazz Festival, and a year-long hiatus at the Bray Jazz Festival, Brilliant Corners is one of the last men standing when it comes to artistically credible jazz programming on this island. Curated by Belfast’s admirably eclectic Moving on Music company, the ten day festival is a model of diversity, from the loose-limbed electro-acoustic grooves of acclaimed UK four piece Dinosaur, led by trumpeter Laura Jurd (Friday); to the feral creativity of hip Brooklyn quartet Wood River, led by Berlin saxophonist Charlotte Greve and featuring leading Irish multi-instrumentalist Simon Jermyn (Saturday); to the liberating sound of legendary UK saxophonist Evan Parker (Sunday). Also on the kaleidoscopic bill are US guitarist Dan Nettles’ surf-rock inspired Kenosha Kid (Tuesday 3rd), the launch of Belfast trumpeter Linely Hamilton’s new album, For The Record, with American grandees Adam Nusbaum and Mark Egan in attendance (Wednesday 4th), and a rare performance from composer Dylan Rynhart’s Fuzzy Logic emsemble (Thursday 5th). There’s also a short season of music films at the Beanbag Cinema and jam sessions at the Sunflower pub in the city’s Cathedral quarter. The festival kicks off with a solo performance from Italian pianist Francesco Turrisi (see below).

Ian Wilson: Adaptation
Teach Ceoil, Kilrush, Co. Clare (also Friday, Miltown Malbay Community Centre, Co Clare)
cmc.ie
Often the most interesting music is to be found in the cracks between established stylistic boundaries, and Ian Wilson’s new work, Adaptation, will certainly have the genre police consulting their note books. Commissioned by Clare County Council as part of its enlightened Gaining Ground initiative, the respected Belfast-born composer’s new composition explores issues around immigration and assimilation in rural west Clare through the prism of the old trad standard, The Mason’s Apron. Clare-based jazz guitarist Joe O’Callaghan and Japanese-born improvising pianist Izumi Kimura – two musicians with the necessary blend of musicianship and open-mindedness to take on Wilson’s challenge – will give the composer’s score its first airing in two free performances in Kilrush and Milltown Malbay which will draw the open of ear from far and near.

Francesco Turrisi
Mermaid Arts Centre, Bray
mermaidartscentre.ie
Italian-born and Dublin-based, pianist Francesco Turrisi has always been something of a moving target, but even by his standards he’s had a particularly busy year. A musical polymath with talented fingers in many pies, including early music, Arabic music and jazz, his latest collaboration, with fast-rising American folk singer Rhiannon Giddens, has seen him touring the world and led to last year’s I’m On My Way, an album which was nominated for a Grammy earlier this year. Turrisi returns to Ireland this week and to the music from his 2018 album Northern Migrations, which charts his journey in music and memory, from Turin, the place of his birth, across Europe and eventually to his home in Ireland.