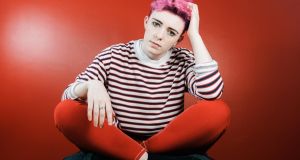 Derry singer-songwriter Roe: “Jack Garratt’s ‘Phase’ inspired me so much because I couldn’t comprehend how one person could create these amazing songs and perform them live alone.”

Two years ago I had no idea what kind of musician I wanted to be. I was studying music in college and had just started working with my now producer Liam Craig.

We worked on the first couple of tracks together and came up with a super full band-oriented sound which we were both pretty happy with but after a while it became apparent that it wasn’t really the direction I wanted to go in.

That was when I came across Jack Garratt’s Phase. It inspired me so much because I couldn’t comprehend how one person could create these amazing songs and perform them live alone. The lyrics have depth and meaning and the production is so clever.

I fell in love with it because of how emotional and powerful the songs are. This is the album that made me think about what kind of musician I want to be and made me want to take up the challenge of performing everything myself live.

Phase still matters a lot to me because these are the songs that helped me find my sound, and I think everyone needs to hear it because it’s a songwriter’s and producer’s dream.

Roe’s new single Hey Thomas is out now and plays festivals this summer such as Knockanstockan, Indiependence, Castlepalooza and Another Love Story. She also plays Dublin on August 9th supporting Art School Girlfriend in The Sound House.