A concert to send you to sleep? Max Richter epic gets Irish premiere

Eight-hour Sleep to be performed, for 200 slumbering listeners, at Carlow Arts Festival 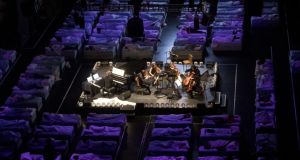 Sleep, Max Richter’s eight-hour musical epic, is to get its Irish live premiere at this year’s Carlow Arts Festival, where the slumbering audience will listen to it in bed under what the organisers hope will be a canopy of stars.

Tickets go on sale on Friday morning for each of 100 prepitched two-person tents that will allow the audience to hear the piece, which Richter designed to be as long as a full night’s rest, as its creator intended.

The German-born British composer calls Sleep “an eight-hour lullaby”, structured as a large set of variations, “to be listened to at night”. The 31 parts of this “manifesto for a slower pace of existence”, which last from just under three minutes to almost 35 minutes, combine piano, cello, viola, violin, organ and soprano voice with synthesisers and other electronically created sounds.

It will be performed in the grounds of Carlow College on Friday, June 7th, by the Max Richter Ensemble and the soprano Grace Davidson, on the first date of their European tour. The dozen or so previous performances have been in London, Berlin, Sydney, Paris, New York, Los Angeles and Tokyo, among other cities.

The director of Carlow Arts Festival, Jo Mangan, says: “I had the extraordinary privilege to witness this work at SXSW in Austin, Texas, last year. It was one of the most incredible artistic experiences of my life. The work is cleverly written to coincide with the lowest of heart beats when we are in deep sleep. I thought I would be able to stay awake and listen to the live orchestra throughout the night, but that was clearly not the case when the first swell of cello roused me from my slumber – and was so powerfully beautiful that I found myself weeping. This cycle of sleeping, waking and weeping happened on multiple occasions throughout the night. It brings me great joy to be able to share it with an Irish audience.”

Richter, who consulted the American neuroscientist David Eagleman to learn about the way the brain functions as we sleep, is well known for combining neoclassical with postmodern and minimalist music. His collaborated with the actor Tilda Swinton on his second album, The Blue Notebooks, from 2004, and used an original voice recording of the novelist Virginia Woolf for his 2017 album, Three Worlds: Music From Woolf Works, taken from the score he composed in collaboration with Wayne McGregor, resident choreographer at the Royal Ballet in London.

Each two-person tent costs €110 plus booking fee; tickets go on sale at 9am on Friday, March 29th, from carlowartsfestival.com. The full festival programme, marking the event’s 40th anniversary, will be launched on April 17th.

Without the Blueshirts, there would have been no Fine Gael
9