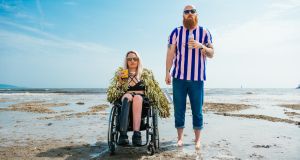 Pure Shores: this new club night has many things going for it – free admission, cool venue, 11pm start, and two of the most experienced DJs in Ireland Louise Bruton and Michael Pope

Yola
The Academy Green Room, Dublin
Due to demand, Yola’s Whelan’s gig has been upgraded to the Academy’s Green Room venue, which is a nice confidence boost for the singer from Bristol. Taking on a soulful sound that sits between Aretha Franklin and Dusty Springfield, her debut album Walk Through Fire was produced by Black Keys member Dan Auerbach and she injects some country and American into her songwriting, making her one of Britain’s most interesting artists. Her appearance on Jools Holland’s annual BBC Two Hootenanny is well worth a gawk. LB

Eurovision Party
Anseo, Dublin
One week ahead of the main event, Eurovision fans might need something to help stretch their muscles and warm up. Enter Anseo’s Eurovision party. Attendees are encouraged to bring their own flags for a night that promises a run-through of every song competing in Tel Aviv, the greatest hits of Eurovisions gone by (if Euphoria by Loreen doesn’t get played three times in a row, what’s the point?), an opportunity to dance to this year’s no-qualifiers and, of course, a Eurovision Song Contest quiz. LB

Elkae
Whelan’s, Dublin
Elkae is the electronic-soul project from Dublin artist Laura Keane and she’s launching the release of her second single, the richly layered I Feel, in Whelan’s. Following on from her debut single Sold, which has been featured on Irish music radio shows on Spin 103.8 and FM104, she’s hoping to be part of the summer soundtrack with this synth-heavy track. So far this summer, she is booked in to perform at Electric Picnic, Indiependence and Bloom 2019, with some more to soon be confirmed. LB

Better Oblivion Community Centre
Vicar Street, Dublin
Each on their own would constitute a rewarding night out, but when you have the creative commingling of Conor Oberst and Phoebe Bridgers, then attendance is a no-brainer. Bridgers is a forceful presence, a Los Angeles singer-songwriter with one acclaimed solo album (2017’s Stranger in the Alps) to her name. Nebraska-raised Oberst (who collaborated with Bridgers on one track on her album) is the more commercially successful figure, best known for his work in Bright Eyes, and several other side and solo projects. Working together in Better Oblivion Community Centre, the musicians display creative empathy and confidence, as their debut solo album (“a melancholic delight” – The Line of Best Fit) proves. TCL

Dermot Kennedy
Olympia Theatre, Dublin (Also Tuesday 14th, Wednesday 15th, Thursday 16th, same venue)
Dublin songwriter Dermot Kennedy has in the space of two years become one of the country’s most successful musical exports. While his debut studio album has yet to be released, Kennedy’s success to date has been advanced by more than 300 million streams on Spotify. This, in turn, has alerted music promoters worldwide to his appeal, which hinges on his songwriting prowess and a gritty, sombre voice that isn’t too many miles away from a canny blend of Ed Sheeran and David Gray. Whatever about the influences, Kennedy certainly writes a decent folk/pop tune. All four shows are sold out. TCL

Olly Murs
3Arena, Dublin (Also Tuesday 14th, The SSE Arena, Belfast)
The fact that Olly Murs’s latest tour is called All the Hits might come as a surprise to some of you. The runner-up to Joe McElderry in 2009’s X Factor, his career has seen him host The Xtra Factor and work as a judge on The Voice UK, while releasing all those hits including Heart Skips a Beat and Dance with Me Tonight. Meanwhile McElderry’s latest release was a 2017 cover album of songs from films and musicals. Hmm. LB

Gods of Rap
3Arena, Dublin
Ah, the 1990s, we remember them well. And so the nostalgia kick continues as three of the world’s most influential rap groups take to the stage separately (and, we’re guessing, with a blend of various members) to brandish their best-known tunes. It’s an anniversary bash, basically, as Wu-Tang Clan’s Enter the Wu-Tang (36 Chambers) has recently celebrated its 25th birthday, while De La Soul’s 3 Feet High and Rising turns 30, and Public Enemy’s It Takes a Nation of Millions to Hold Us Back stretches towards its 31st year. Irrespective of the birthday dates, there’s no denying the iconic and significant nature of not only the albums but also the groups that made them. For hip-hop fans, this is the only show in town this week, this month, this year. TCL

The Intersection Between Hip-Hop Culture and Education
The Science Gallery, Dublin Musician and educator Jahi leads an interactive workshop and examination into hip-hop as a world culture and through conversation and performances, he asks his audience to engage with the genre in a new way. A recent project of Jahi’s is PE 2.0, a reimagination of Public Enemy’s music, giving the group’s music added context to current events. Geared at music lovers and music educators this show aims to show that there’s more to hip-hop than commercial rap. LB

Cormac Neeson
The Grand Social, Dublin (Also Friday 17th/Saturday 18th, Central Arts, Waterford , Sunday 19, Spirit Store, Dundalk, Co Louth)
About 10 years ago, Northern Ireland’s The Answer were on the cusp of commercial success, but, alas, their brand of hard rock didn’t necessarily capture the ears or the imagination of a mainstream audience. Cue a time spent in the cooler for the band, but perhaps a more reflective time for their singer, Cormac Neeson, who launches his debut solo album, White Feather, with a raft of Irish shows. The album is far removed from The Answer’s hard rock, veering more towards Americana/folk/blues, but as usual, Neeson’s heart is in the right place. See cormacneeson.co.uk for details of further Irish shows this month. TCL

Mik Pyro
Róisin Dubh, Galway
Mik Pyro is the frontman of the filthy Dublin funk and soul band Republic of Loose but since they wound things down in 2014, Pyro has gone through some personal battles, like losing both of his parents in a short space of time and addiction, that saw him take a break from music. He has since surrounded himself with music and is set to release his debut solo album this year. This is his first headline show outside Dublin, a highly anticipated return at that. LB

Nighthawks at Cobalt
Cobalt Cafe & Gallery, Dublin
You need to be quick to grab tickets for the irregular Nighthawks at Cobalt gigs – they sell out in jig time because the line-up is always stuffed with quality acts across various arts disciplines. Tonight features spoken word (Phil Lynch), comedy (Andrea Farrell, Martin Angolo), and music (Woodheart, Grainne Hunt, Pale Rivers, and Ken O’Duffy, whose forthcoming solo album, The Last Night at the Gentleman’s Club, will be selectively previewed). TCL

Nava
Farmleigh House, Dublin
Last year, this Irish-Persian group released their debut album, Tapestry, the title of which was less a nod to Carole King’s album of the same name and more to the woven nature of their music. Between banjo player Paddy Kiernan, guitarist Niall Hughes, and multi-instrumentalist brothers Shayan and Shahab Coohe, Nava deliver a veritable desert storm that pivots around an improvisational structure, albeit one with a central heart-thumping core. The show takes place in the very grand Ballroom, 3pm-4pm. TCL

Pure Shores
Wigwam, Dublin
This new club night has many things going for it – free admission, cool venue, 11pm start, and two of the most experienced DJs in Ireland: this paper’s Louise Bruton and Le Galaxie’s Michael Pope. You’ll arrive for these, for sure, but then you’ll stay for the music, which promises to be female-centric pure-pop-for-now-people. The upshot and the lowdown? Everything from the one-namers (including Shura, Madonna, Peaches, Ariana, Beyoncé, Robyn, Britney, Laoise, Sia, Kylie, Lizzo, Rihanna, Marina, Bjork, Loah, Lorde, Solange, Sigrid, Mahalia) to band-fronters (including Goldfrapp, Yeah Yeah Yeahs, The Cardigans, Blondie, Portishead). TCL

Robert Forster
Button Factory, Dublin. Also Monday 20, Cyprus Avenue, Cork
The former Go-Betweens songwriter and singer has a last-man-standing sensibility, viewed by casual observers as a veteran of a different songwriting era and by avid fans (guilty as charged) as one of the few remaining smart pop classicists. Of course, his previous band never reaped the rewards they so richly deserved, but what’s a songwriter to do except keep on truckin? Judging by Forster’s most recent album, Inferno (a five-star humdinger in these very pages), the guy hasn’t lost his touch. If you can’t make it to these shows, Forster returns to Ireland in November – book that babysitter now! TCL