Gig of the Week: Indiependence, Castlepalooza and All Together Now 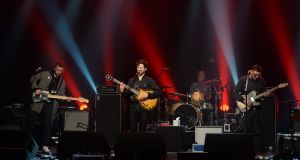 Up until this year, music fans planning to meander across the August bank holiday weekend outside Dublin had to choose between two open-air music festivals of any reasonable profile: Indiependence (Deer Park Farm, Mitchelstown, Co Cork) and Castlepalooza (Charleville Castle, Tullamore, Co Offaly).

Each festival is of mostly equal stature, and draws a young-ish audience (post-Leaving Cert upwards) with a provincial and urban demographic. With a capacity of 12,000, Indiependence usually has headliners pulled from the top three drawers of UK and Irish pop/rock (this year’s principal slots are taken by Primal Scream, Walking on Cars, Jake Bugg, Everything Everything, Kate Nash), probable 2019 headliners (Tom Grennan, Le Galaxie, Sigala, Circa Waves, Delorentos), and a lengthy line-up of up-and-coming Irish acts and musicians.

With a capacity of 4,999, Castlepalooza, meanwhile, has latterly focused on exclusively Irish headliners, although a main draw next weekend is Sacramento, California dance-punk act, Chk Chk Chk. Aside from this band, the music focus at Charleville Castle sticks to an all-Irish combination of alt.pop (All Tvvins, Fontaines DC, Paddy Hanna, Slow Riot, State Lights), groove-oriented electronic pop (Ships, New Jackson, Pursued by Dogs, Slow Place Like Home) and a rake of DJs.

Having been to these festivals over the past six years (more often at Indiependence, admittedly), I can safely say they know their audience, they hold their own, and they are to be admired for, year-on-year, showcasing the best of established and latest Irish music. There is, however, a newborn festival baby in a buggy screaming to be heard, and that’s All Together Now (“a weekend of freedom and escapism through music, spoken word, comedy, theatre, debate, art and workshops,” according to its website).

With a capacity of 15,000, ATN has pitched itself not only as an obvious alternative to Indiependence and Castlepalooza, but also as something of a game changer in the open-air festival calendar. For starters, ATN is a strictly over-21s event, which will surely make the other festival promoters happy enough. And then there’s the line-up. Having founded Electric Picnic in 2004 (and then exited in 2014, with a settled legal action against Festival Republic Dublin), promoter John Reynolds has tapped into a festival atmosphere for ATN that some observers maintain Electric Picnic once had but which has been all but obscured as the event’s capacity has increased (from about 30,000 in 2006 to 52,000 this year).

With music from the likes of Underworld, Fleet Foxes, Róisín Murphy, Chaka Khan, Villagers, First Aid Kit, Nils Frahm, and Thundercat (as well as a gathering of achingly good acts and DJs we don’t have room to list), as well as other parallel add-ons such as Lawns of Tranquility, Food & Feast, Arcadia Afterburner, and All Curious Minds, there are aspects to ATN that mark the start of something very good. Even better, Reynolds has located the event at Waterford’s Curraghmore Castle Estate, which is as magnificent a setting for a festival of its size as you can imagine. As ever, we await further developments with interest.

In the meantime, all you festival folk, freak out responsibly.

Don’t use Google, don’t use work email, don’t hit ‘accept all’: how to fight for your privacy
9