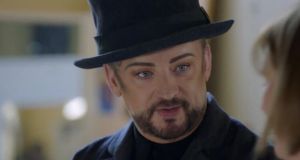 Singer Boy George, who recently appeared on 'Who Do You Think You Are', forged a successful career as a DJ in the interim.

The original line-up of 1980s pop group Culture Club have released their first new material in almost 20 years with the single Let Somebody Love You.

The band have sold more than 150 million records worldwide and are best known for hits such as Do You Really Want To Hurt Me and Karma Chameleon.

Boy George, who grew up in south London in an Irish family, recently appeared on the BBC genealogy show Who Do You Think You Are? where he explored his family's connections to Irish history.

They have previously performed Let Somebody Love You live but had never released a recorded version of the track.

The song is in keeping with the band’s classic reggae-infused sound and features the lyrics: “Love is revolution/War and famine too/If you’ve the hunger in your heart/Let somebody love you”.

Also shared is the album artwork for LIFE, which has been shot by acclaimed fashion photographer Rankin.

The band reunited in 2014, some 12 years after playing a 20th anniversary show at the Royal Albert Hall in London. They have embarked on two world tours.

Singer George, real name George O’Dowd, forged a successful career as a DJ in the interim.

The new wave act’s last album of new material, Don’t Mind If I Do, came out in 1999 and featured the top five single I Just Wanna Be Loved.

Ahead of the group tour of the UK in November, George said: “We put together an amazing show that is going to be filled with hits and fabulous memories.” – PA

Eugène Delacroix: Reflections on a revolution in art
7

Blindboy: ‘Being recognisable is absolute hell’
9

Hong Khaou: ‘Vietnam is always seen as a victim. I wanted to show it as it is’
10