The Hunger review: An opera let down by its musical material 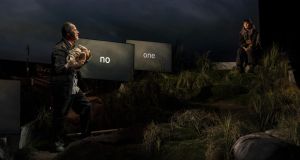 Abbey Theatre, Dublin
★★☆☆☆
It was the composer Donnacha Dennehy’s discovery of Annals of the Famine in Ireland, a first-hand report by the American writer Asenath Nicholson, that opened up for him a subject he had long wanted to address. The outcome is his docu-opera The Hunger, which has been presented in various guises over the years and which, in its latest incarnation, had its Irish premiere at the Abbey Theatre, in Dublin, on Tuesday.

The horrors of the Great Famine are all too well known in Ireland. Dennehy paints his picture of what was involved through two characters, sung in English by the soprano Katherine Manley and in Irish by the sean-nós singer Iarla Ó Lionáird; his character is a man whose life and family have been torn apart by the effects of the Famine. Dennehy, who prepared his own libretto, gives the pair no names. But they would be well characterised as Witness and Victim.

Nothing much happens in the opera. The woman, always compassionate, gradually makes her way down the central slope, a sliver of mountain, on Jim Findlay’s set. The man, a mere shadow of what he might have been, makes his way upwards.

Dennehy calls on Paul Krugman, Noam Chomsky and Megan Vaughan to make the point that Britain’s watchword was not to interfere with market forces, and that similar thinking  led to many of the world’s later famines

The point of the opera seems to be to place the fate of the millions who died or emigrated because of the Famine in a broader context, to move beyond seeing the matter as a British-Irish scandal and see it instead as the outcome of economic power and ideology.

To that end Dennehy calls on video evidence recorded by the likes of Paul Krugman, Noam Chomsky and Megan Vaughan, making the point that the watchword for the British government of the time was not to interfere with market forces, and that similar thinking has resulted in many of the world’s later famines.

The set has a large video screen showing moody mountain landscapes and smaller screens that also translate the Irish words and carry the images of the video evidence-givers. Tom Creed, the director, takes an unobtrusive approach, and the visuals – costumes by Tilly Grimes, lighting by Christopher Kuhl – are consistently atmospheric.

Musically, Dennehy seems to have approached his task as a romantic who is hopelessly in love with the timbral possibilities of microtonally inflected instrumental writing.

Logically, there’s a point to this. The man and the woman are worlds apart, and so are the cultured vocalism of Manley’s singing, the hoarse, intonationally unstable, earthy voice of Ó Lionáird, and the see-sawing patterns of Crash Ensemble under Alan Pierson.

The problem is the weakness of the musical material. The writing for soprano is trite. The sean-nós singing sounds locked in its own groove. And the instrumental contribution is like a kind of patter.

Runs at the Abbey Theatre until Saturday, August 24th

Stuck for something to do during coronavirus lockdown? Have a #CovideoParty tonight
10

Tracy Chapman: ‘Being in the public eye is uncomfortable for me’
Real news has value SUBSCRIBE