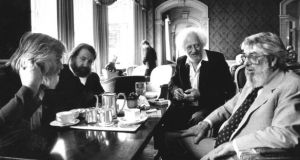 Musician and former member of The Dubliners, Eamonn Campbell, has died aged 70 after a short illness.

Campbell’s death was announced by his current band, The Dublin Legends, in a Facebook statement on Wednesday evening.

“We are very sad and devastated to announce that our friend and colleague Eamonn Campbell has died after a short illness,” said the band.

“Eamonn was a true legend and brilliant guitar player. He passed away peacefully surrounded by his wife and family.

“He will be greatly missed by all his friends and fans around the world. We are heartbroken and we thank you all for your thoughts and prayers at this time.”

There will be a good session in heaven tonight, RIP Eamonn #dubliners pic.twitter.com/607coHYkoE

I'm so sad to hear of the passing of the great Eamonn Campbell, a brilliant guitar player who played with the Dubliners for many years 🌹#Rip pic.twitter.com/L3fShKXUpC

Campbell, from Drogheda, Co Louth, officially joined The Dubliners as a guitarist in the 1980s. When the band stopped touring after the death of banjo player Barney McKenna, Campbell continued to play with The Dublin Legends.

Campbell had been touring with The Dublin Legends in Holland and Belgium when he fell ill, according to a statement from the musician’s family.

President Michael D Higgins said he had learned of the musician’s death “with great sadness” and extended condolences to his family and friends.

“He will also be missed by those, in Ireland and further afield, who continue to enjoy his voice and his music, with The Dubliners, when Sabina and I met him so often. Many others will have the warmest memories of his work with many other artists.”

The Dublin Legends singer Sean Cannon said: “I am devastated. We have spent the last 30 years together touring and playing concerts. He was a great player with a great feel for Irish music.”

Banjo player Gerry O’Connor said: “ I have not come to terms with it yet. He was such a lovely guy. Always had a big smile on his face. He just adored playing live. He is a huge loss.”

“He was a real musicians musician and he always knew what the audience wanted to hear. Devastated,” said singer Paul Watchorn.

Eamonn is survived by his wife Noreen, his children Paddy, Eamonn Jnr, Emma-Jane, Ciara and Niamh and by his grandchildren.