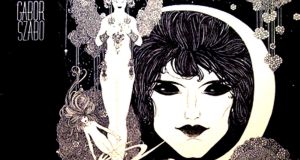 Gabor Szabo was something of an irresistible force. His upbringing in Communist Hungary was difficult but edifying. Music was his escape. He grew up to be a man of strength with a fatal weakness.

In his early years, he voraciously consumed all the exciting and exotic jazz sounds coming from the Voice of America broadcasts.

By the time he fled Budapest in 1956 as the Russian tanks hit the streets, he was well versed in all styles of guitar playing including classical.

It was his jazz virtuosity, however, that earned him his first break in the US.

He started off several rungs up the ladder playing with Chico Hamilton. All the while his horizons expanded. He longed to break out into a freer form where everything from the Hungarian folk music of his childhood to the pop music of the day could merge.

He was savvy enough to know he would have to create his own platform if immortality was to be his goal.

In 1966, he quit a prestigious gig at Impulse to set about forming Skye Records with Cal Tjader and Gary McFarland. It still took another three years before work began on his masterpiece in 1966.

It was wildly ambitious in scope. A hint to the inspiration for the material is the title Dreams. There’s a delightful hush to the whole thing even though the compositions stray far and wide from the peace at its mellow core. Szabo lets his incredible band express themselves individually and only occasionally weighs in with his distinctive solos.

Although there are many disparate elements, the album was conceived as a whole and it begs repeat listening, so addictive are its charms. There’s an ethereal atmosphere to most of it as if Szabo was tapping into the pre-cognitive feeling for music that can blossom into such magical thinking later on.

It rises and falls like the wind in an expertly measured elemental fashion. The transcendent moments are divine but it does not lack for power or groove either. With its equally beguiling cover it’s a mystery this record disappeared.

Tragically, it mirrors Szabo’s sad demise who died aged 46 after a long battle with drug addiction. Luckily for us, he captured his reveries in time and bequeathed us an everlasting gift of true grace and beauty.