Unfamiliar with Irish-language opera ‘Eithne’? You are not alone 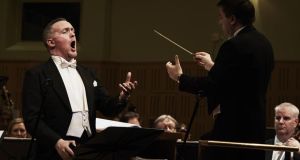 Baritone Gavan Ring, who has published a dissertation on Robert O’Dwyer’s Irish-language opera “Eithne”, and conductor Fergus Sheil during the first performance of the work since 1910

“I should like much to hear this opera again, under more favourable conditions – to hear it in a proper theatre, with a proper stage, full scenery, and better soloists.”

Not my words. This was the conclusion of critic JJ O’Toole in the now defunct Irish nationalist newspaper the Leader following the first performance of Robert O’Dwyer’s Irish-language opera Eithne in 1909. More than a century later, at last Saturday’s concert performance by Opera Theatre Company, with the RTÉ National Symphony Orchestra at the National Concert Hall, audience members expressed virtually the same opinion (other than the bit about the soloists).

O’Toole nicely set up the question that seemed to be in the air on Saturday: why doesn’t someone present Eithne as a full production?

For O’Toole, his wish was granted a year later when Eithne ran for four nights at the Gaiety in May 1910. Until last Saturday there had been no performance since. Here in 2017, a full staging remains moot, chiefly because the conversation has only just begun and that for one obvious reason: until now, no one had ever heard of Eithne.

Okay, not quite no one. Irish musicologists demonstrate an awareness of the opera and its significance, while as recently as last year it appeared in the non-academic setting of The Invisible Art, an exploration of Irish music over the past 100 years, edited by Michael Dervan of this paper.

There must also be buffs who share JJ O’Toole’s hope. But in all, this is a small, rather quiet group. For everyone else, Eithne is news, and that included the conductor for Saturday’s performance, Fergus Sheil, who admits he wasn’t previously aware of what he calls “a fascinating and unknown part of our cultural landscape”.

What makes Eithne’s invisibility so interesting is that the proudly nationalist O’Dwyer composed it amid the powerful cross-currents of the Gaelic and Irish literary revivals in full flow at the time. Although by no means the pioneer in this, O’Dwyer applied a Celtic transfer to the European appetite for operas with settings from classical or Norse mythology. He collaborated with his librettist, the priest and playwright Tomás Ó Ceallaigh, to create an opera based on the Irish legend Éan an Cheoil Bhinn (the Bird of Sweet Music). And he set the whole thing in Irish. This is what earns Eithne its special status as the first ever opera staged in the Irish language.

Yeats, the Abbey and the GAA remain with us, alongside all the vast creative output generated across so much artistic and cultural endeavour during a high point in the quest for Irish identity. Just not opera and not Eithne. Maybe there has always been something chronically weak about opera in Ireland, dating back to the early 19th-century’s waning Anglo-Irish support for classical music in general and opera in particular. This is arguably still the case today, when the capital remains without an opera house, singers are obliged to forge their careers abroad, Government funding is stuck near the bottom among EU countries, and the provision of opera is sporadic.

Or maybe it has nothing to do with any of that: maybe Eithne is dire and that’s why it disappeared.

This then is the conversation that received a shot in the arm on Saturday night. The occasion owed much to the young Irish baritone Gavan Ring who wrote his doctoral dissertation on the opera and brought it to the attention of Sheil. (This column is indebted to this dissertation.)

The opera is far from dire. Eithne is well crafted in Wagner-lite style, wearing very lightly its infrequent and unobtrusive assimilation of music derived from Irish tradition. O’Dwyer is not an Irish Dvorak or Bartók. What engenders Eithne’s Celtic disposition is the story and the language.

Crucially, the Irish sounded wonderful, appearing to lend itself to operatic declamation with no less ease than do Italian or German, Russian or Czech. Surtitles ensured understanding. The cast was all Irish, with small roles ably taken by members of the very fine chorus, which O’Dwyer keeps busy, particularly in the first act when there are lively arguments about who should succeed the high king, about the consequences for whoever killed the king’s hound, about who should marry his son, and about the woman who speaks up to advise the king. O’Dwyer invests the chorus with an almost turba-style presence.

Listening to soprano Orla Boylan in the title role it was hard to imagine anyone else singing it, so effortlessly and credibly did she own it. Yet on this occasion – or perhaps owing to the nature of the score – the singer who best sold this unfamiliar music was tenor Robin Tritschler as Ceart, the king’s son and the man destined to win Eithne’s hand. The clarity and insight that have always characterised his style seemed ideally suited to the role.

Ring brought a regal presence to the role of high king, fighting through the unfavourable orchestral textures with which O’Dwyer thanked him for reviving his forgotten opera (and which drew comment from critics in 1909). Mezzo-soprano Imelda Drumm fully inhabited the strong, sympathetic persona of Nuala, the childminder who controversially has the king’s ear, and bass John Molloy energetically injected danger as the giant who guards the entrance to Tir na nÓg.

While Sheil and the orchestra provided largely sensitive accompaniment and delivered a satisfactory rendition of this long unheard music, no performance can be complete without a full staging.

Saturday’s performance is free to view on You Tube, and I heartily commend Ring’s dissertation – eminently readable as well as incisive and fascinating – which is also available online.