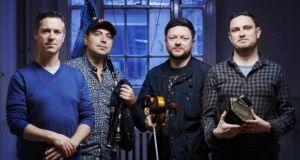 The penultimate concert in this extensive and inventive Music Network tour. Galician gaita piper Anxo Lorenzo has saddled up with three exceptional Irish musicians to mine the deep seams of both the Galician and Irish traditions. Murray is a guitarist who has accompanied Seamus Begley and Sharon Shannon with enormous vim, vigour and at the same time, remarkable subtlety. O’Connor is a fiddle player who comes from a long and distinguished line of Louth musicians and whose collaborations have included membership of Ulaid and At First Light. Talty is a Clare concertina player who curates a refined roster of recording artists on his own label, Raelach Records. Wide horizons are this foursome’s stock in trade.

This year’s festival hits its stride in earnest today with a raft of pub sessions, a supercéilí and a particular treat: a noon time solo performance by Kevin Burke in the Pepper Canister Church. Later this evening, Muireann Nic Amhlaoibh and Gerry O’Beirne are in City Hall, Barbara Dickson is in the Pepper Canister Church and Cherish the Ladies anchor a gala concert in Dublin Castle Printworks, along with the Shandrum Céilí Band and Lau. Tomorrow’s closing roster includes Tim Edey, The Henry Girls, Mary Bergin, Louise Mulcahy and Maria Doyle Kennedy. An embarrassment of riches.

If you want to hear the Irish tradition distilled, this is the duo to hear in a live setting. Together they’ve shared stages in various collaborations over four decades, from their early days with The Bothy Band. Both share Donegal heritage too. Glackin’s tastes run from the intimate Sliabh Luachra music of Pádraig O’Keeffe to the tunes of Con Cassidy and John Doherty of Donegal. Lunny’s reach is beyond anyone else’s, on bouzouki and guitar. A real treat.

The legacy of Scottish poet and songwriter Robbie Burns is celebrated tonight with a diverse gathering of musicians including The Tannahill Weavers, St. Lawrence Howth Pipe Band, John Kelly & friends, George Duff and the Howth Singing Circle Shanty Singers. From Auld Lang Syne to Green Grow the Rushes O, Ae Fond Kiss and Willie Stewart, Burns’ songbook is a seemingly endless joy, as anyone familiar with Eddi Reader’s landmark collection of his songs will attest. This annual gathering is a must for all lovers of folk song. Booking essential.