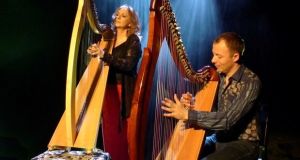 Moya Brennan & Cormac de Barra
Róisín Dubh, Galway 8pm €26/€24 roisindubh.net
Harp duo Brennan and de Barra have enjoyed a long and fruitful musical partnership and their current tour celebrates the release of their album, Timeless. Brennan was recently the recipient of a Lifetime Achievement Award at the RTÉ Radio 1 Folk Awards, and a harp concert as we near the close of the year is a fitting reminder of just how far our national instrument has travelled in recent years, with more players than ever before.

Leonard Barry, Declan Folan and Shane McGowan
The Dock, Carrick on Shannon 8pm €16 thedock.ie
Hot on the heels of the release of their very fine album, Hurry the Jug, this Sligo/Kerry trio bring pipes, fiddle and guitar on a picaresque journey through a cannily-chosen raft of tunes. All three have a strong track record of collaborating with diverse musicians from Kevin Burke to Zakir Hussain so expect to hear some bold and brave choices in the mix.

Charlie Piggott and Eugene Lambe
Glór, Ennis 8pm €10 glor.ie
This is the final concert in Glór’s autumn/winter Words & Music series, where duos have been encouraged to share the stories behind the tunes as much as the tunes themselves. Tonight features two longtime friends and collaborators: piper, pipe-maker, whistle-player and music collector Eugene Lambe and former De Danann member, accordion player and composer, Charlie Piggott. Both weave magical stories around the tunes they play.