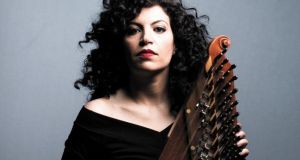 Syrian composer and player of the qanun Maya Youssef plays at The Dock, Carrick on Shannon on Saturday

The whole gamut of the tradition is there to be savoured at this year’s spring school. Today kicks off with early morning Irish language conversation classes followed by sean nós dance workshops and a lunchtime concert from music students. Breanndán Begley will lead a session of Na Caipíní in the mid-afternoon, and later, Steve Cooney will host a masterclass on harmony and syncopation. Tonight’s concert in Halla na Feothanaí will feature the sublime Time Edey with Steve Cooney, Dermot McLaughlin, Nell Ní Chróinín and others. Tomorrow will wrap up with a noon singing session, with Ballyferriter’s every nook and cranny hosting a song or a tune, or a dance step.

Syrian composer and player of the qanun, a large, trapezoidal 78 stringed Middle Eastern plucked zither. It’s the only musical instrument in the oriental takht (traditional Arabic ensemble) that can play all the notes of Arabic scales on open strings. Maya released her solo debut album, Syrian Dreams, in response to the outbreak of war in Syria. With a strong belief in the healing power of music, Maya is one of the very few women players of this instrument, which is long associated with male players only, in Arab musical traditions.

Máire Ní Chróinín, Eilish Kennedy, Jerry O’Reilly, Fergus Russell, Frank Nugent, Mick Keeley, Antaine Ó Faracháin and a raft of other club regulars gather to listen and sing traditional songs in any language. This is an open, welcoming singing session where singers can replenish their songbooks and listeners can relish in the robust state of health of our singing tradition.

Altan, Mike McGoldrick, John McCusker and John Doyle, Paddy Keenan, Frankie Gavin, Paddy Glackin, Dermot Byrne and The Bonny Men are just some of the musicians who are being lured to this year’s Gathering. A sure highlight will be a special tribute concert to the music of Clare and Sliabh Luachra includes performances by the Lawnhawns featuring Andrew McNamara, The Conifers and The Sliabh Luachra Band with Paudie O’Connor, Gatehouse, Jackie Daly, Matt Cranitch and Paul De Grae.