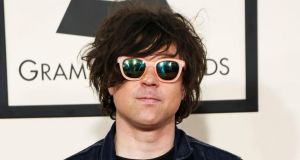 Ryan Adams’s new album has been shelved, and whether his sold-out Irish shows will go ahead next month is unclear, after this week’s allegations that he behaved abusively towards an underage girl. The FBI is now investigating the claims, according to the New York Times.

The American singer-songwriter had planned to release three albums this year on his own label, Pax-Am. The first, Big Colors, slated for release on April 19th, has been put on hold, Variety reports. Universal Music Group, which distributes Adams’s releases, had pulled the album from its release schedule, and the website for Pax-Am has deleted the pre-order pages for the CD and LP. The status of the remaining two albums is unclear.

Adams is due to begin his next tour at the Olympia Theatre in Dublin on March 30th and 31st. The concerts’ promoter, MCD, has not responded to an Irish Times query about whether they are going ahead. The singer is also due to perform in London, Newcastle, Birmingham, Manchester, Glasgow, Sheffield and Cambridge.

On Wednesday the New York Times reported that Adams sent more than 3,000 text messages to the girl over a nine-month period starting in late 2014, when she was 15. The messages allegedly included explicit photographs. The girl, named only as Ava, claimed that Adams also exposed himself during phone sex sessions on Skype.

Adams has denied that he “ever engaged in inappropriate online sexual communications with someone he knew was underage” in a statement through his lawyer, Andrew B Brettler. On Thursday Brettler told the New York Times that he had not been contacted by law enforcement. Lawyers for Ava, who is now 20, declined to comment to the paper.

I am not a perfect man and I have made many mistakes. To anyone I have ever hurt, however unintentionally, I apologize deeply and unreservedly.

An unnamed official told the New York Times that the FBI is investigating whether Adams committed a crime by engaging in sexually explicit communications with an underage fan. The official said agents from the Crimes Against Children squad in the bureau’s New York office had taken the first steps to opening a criminal investigation. They will seek to interview Ava, obtain the text messages between her and Adams and any other evidence. If found credible, they may subpoena the mobile-phone records of Ava and Adams, the official said.

In more fallout from the controversy, the amplifier company Benson has announced that it is severing ties with Adams, with whom it had been developing a product. “We are saddened and surprised by the recent allegations,” its founder Christopher Benson said in a statement. “We have decided to suspend our relationship with Mr Adams at this moment, and will no longer move forward with the development of the Ryan Adams signature model.”

An Adams-branded guitar effects pedal produced by Walrus Audio has been discontinued, as has the VCR Ryan Adams signature pedal produced by JHS pedals. JHS president Josh Schott told Variety: “We have a remaining stock of VCR pedals and are making future plans to fully rebrand and sell this inventory with a portion of the sale going towards the fight against sexual abuse and misconduct.”

After the New York Times published its initial report on Wednesday, Adams tweeted an apology to “anyone I have ever hurt, however unintentionally”, and disputed the reports. “I would never have inappropriate interactions with someone I thought was underage. Period.”

The report detailed further allegations of controlling behaviour by Adams towards women with whom he formed romantic and mentoring relationships. Mandy Moore, Adams’s ex-wife, said: “Music was a point of control for him.” The singer-songwriter Phoebe Bridgers said Adams had supported her musical career when she was 20 and he was 40. They began a relationship that she says turned obsessive and emotionally abusive.

Since the report emerged, more female musicians have shared their experiences of working with Adams. The musician and model Karen Elson posted on Instagram about a “traumatising experience”, adding: “While I’m not quite brave enough yet to speak about my specifics, I’m encouraged that many women have bonded and helped each other heal… The trauma that lingers is often a very powerful silencer of women as is the business that enables these men to thrive without ever facing consequences.”

In January 2017, Adams announced that he was working on a double album by the pioneering punk songwriter Liz Phair. The record was never released. Phair responded to a tweet asking whether she would comment: “If I do, I’ll write about it. But I think you can extrapolate. My experience was nowhere near as personally involving, but yes the record ended and the similarities are upsetting.” – Guardian, agencies